You will definitely be surprised, maybe even be shocked as you discover what really goes on in the Jewish world. 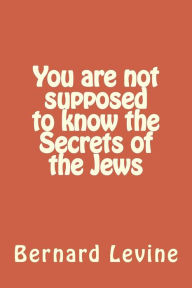 Did you know that Jews are not allowed to tear toilet paper on the Sabbath? Why can't Jewish women read a Bible? Have you heard there's a special Coca Cola made just for Jews? What is the surname of Jesus? Which letter of the alphabet is written upside down in the Bible? Why do Jews not eat cheese-burgers? What's so different about Jewish sexual intercourse? Why do Jewish women wear wigs? Is there a special prayer that Jews say before going to the toilet? Most of the Old Testament is not studied by Jews...why? Did you know that Jews have their own kind of bacon? Why are Jewish women not allowed to show men their elbows or their knees? What is God's name that is left out of most Bibles? Can a Jew have a tattoo?
When do Jews sleep outside? Is it true there are no swear words in Hebrew? How should you tell a Jew about Jesus Christ? Why can't Jews recite and use their own words when they pray?

You will definitely be surprised, maybe even be shocked as you discover what really goes on in the Jewish world.


Is there a special Coca Cola that is especially made for Jews?

For Passover, the Coca-Cola factory brings out a special Passover Coke with their bottles and bottle-caps labelled ‘kosher for passover’. Orthodox Jews will not drink Coke that is not kosher for Passover.

There are also many other products exclusively made for Passover like Passover coffee, Passover soap and even Passover detergent!

Why are Jews not allowed to tear toilet-paper on the Sabbath?

The act of tearing toilet-paper on the Sabbath is forbidden.

There are different kinds of work and the act of cutting or tearing is a type of work which is not allowed to be performed on the Sabbath.

Jews are also not allowed to shave, cut their hair, nails or grass on the Sabbath.

Why are Jewish women not allowed to show men their elbows or their knees?

They believe that men get ‘turned on’ and aroused if they were to see either their uncovered elbows or knees…so not to tempt them and to display modesty, they cover up.