Shadows of the Realm by Dionne Lister

An exciting epic fantasy with dragons, magic and adventure. 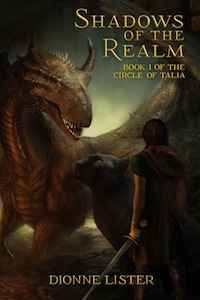 Bronwyn and Blayke are two strangers being drawn into the same war. Their world is facing invasion from the Third Realm. While they move unknowingly toward each other, they are watched, hunted, and sabotaged. When the Dragon God interferes, it seems their world, Talia, will succumb to the threat. Can they learn enough of the tricks of the Realms before it’s too late, or will everything they love be destroyed?

The young Realmists’ journey pushes them away from all they’ve known, to walk in the shadows toward Vellonia, city of the dragons, where an even darker shadow awaits.


Shadows of the Realm has made #99 on Amazon overall, top #100 on Barnes & Noble, and is frequently ranked in the top 100 in its categories on Amazon and iBookstores. It has been featured on the front page of iBooks twice, and has reached top 100 in the fantasy category numerous times. It is also on the Chief Minister's Reading Challenge list for recommended reading in schools in the ACT (an Australian state). This book has sold over 7000 copies and counting. I do paid promotion each year to continue to grow my fanbase.

In a lonely, brick farmhouse a child named Blayke slept under cosy blankets. He dreamt of splashing in warm, summer puddles. His nostrils filled with the scents of grass and earth.

He reached dirty fingers into a puddle at his feet and tried to grab a slimy frog. The touch of his fingers on the water sent the frog dashing away, chased by the black clouds racing across the surface of the water, mirroring the sky.

Thunder boomed again and again. Thick clouds marched to its beat, effortlessly smothering the sun. Blayke’s fingers sank further into the darkening puddle until his fingers touched something rough and icy - too large to close his hand around. Blayke tried to let go of the object but his hand was stuck. Adrenalin flooded his body. He tried to shake the object loose, but to no avail.

Fat pellets of water erupted from the sky, soaking him in seconds. He looked up, squinting his eyes against the pouring rain. He bit his lip against the urge to cry. Every instinct told him to run. Thunder closed around him; lightning struck meters from the quickly expanding puddle. Blayke leaned back, twisting his whole body in a vain attempt to break free. Sweat from his exertion mixed with the rain on his face.

His palm peeled away from its anchor, leaving layers of skin behind. Blayke fell back, landing with a splash on the sodden earth. He stared at his bleeding hand, what had happened?

The ground vibrated beneath him, the tremors matching the slow and powerful rhythm of the thunder. The puddle boiled, bubbles of mud bursting to the surface, contaminating the balmy air with stagnant wafts. Blayke scurried away from the deepening water on hands and knees. He scrambled to rise but the jerking earth toppled him.