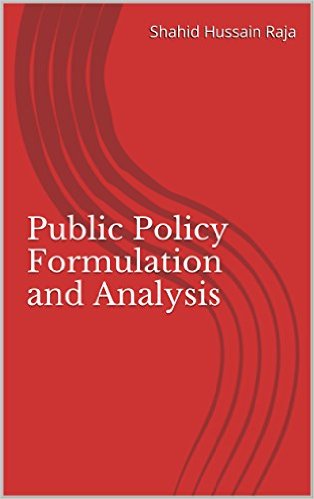 Defines the public policy and describes its various faetures.Lists the steps involves and procedure adopted for formulation of a public policy in the country.It then explains the charateristics of a good public policy and ends with the examination of public policies process in a developing country like Pakistan.


It has just been published;as such it does not have good ranking in terms of sales


During the last few years public policy studies have been receiving a lot of attention in the academic circles all over the world for diverse reasons. Besides the increasing awareness about the role and importance of public policy formulation and implementation in tackling the multifaceted challenges being faced by every country, the main reason for this interest in public policy issues has been the increasingly assertive role of the civil society organizations and the media. They want to know the way public policies affecting a common man are formulated and the manner in which governance apparatus works so as to enable them to make informed judgments and take appropriate actions.

Public policy formulation has gone a metamorphic change during the last three or four decades due to rapidly globalising world. There are at least four ways in which globalization is affecting the policy formulation in each country. Firstly, thanks to social and electronic media, small issues which a decade or so ago could only find place in the back page of a national newspaper become breaking news in major global channels creating advocacy and sympathy movements in different parts of the world. Secondly, with the rapidly globalizing world, global issues like environmental degradation, climate change, GMO, etc., which were only discussed in the corridors of power are being debated in the drawing rooms of countries and creating strong advocacy movements among the population.

Thirdly, centers of actual power and decision making are shifting from local to global level with the outreach of domestic interest groups to their sympathizers in international organizations, multinational corporations and those in the governments of global powers. This outreach enables them to force their own government to accede to their demands because of economic and political clout of the global players.