Megan gets increasingly worried about the up-and-coming school exams... 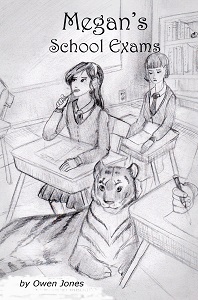 In 'Megan's School Exams', Megan is concerned about her exams because they are the first serious one she has ever sat. She literally worries herself sick, but Wacinhinsha, her Spirit Guide, gives her a pep-talk and gets her through them


The book sells well ehen its predecessors sell well as it is no. 4 in the series

Megan woke up in bed, still thinking about what she had been told in school the day before.

There would be exams before the Christmas holidays. These would be the first ‘real’ examinations that she had ever sat, as far as she was concerned, because the others were ‘just tests’, for school kids, but now she was in a real school – one for adults, or teenagers – near adult – anyway.

This time she would not be testing herself against a bunch of local kids, but against all and the best in the town and it was scary.

Megan wanted to talk to someone about it, but she knew not whom. Despite the fact that Wacinhinsha knew about most things, she somehow doubted that he would know about 21st Century exams in her local school.

Still, time ticked on, so she patted Grrr, who was lying beside her as ever, got up, showered, put on her school uniform and went downstairs to greet her parents and have breakfast.

“Good morning, how are you?” she said to anybody who was listening. Her father was reading the paper and her mother was frying something in the kitchen.

“Good morning, darling,” said her father, lowering the paper for a moment.

“Morning, Megan, here’s your breakfast. Did you sleep well?” asked her mother as she put two plates down, one for Megan and one for herself.

“Oh, like tops, as always. Your Dad and I always just fall fast asleep, as soon as our heads hit the pillow. You know what they say: ‘No sleep for the wicked!’ and that is not us, is it, Robert?... Robert!...”