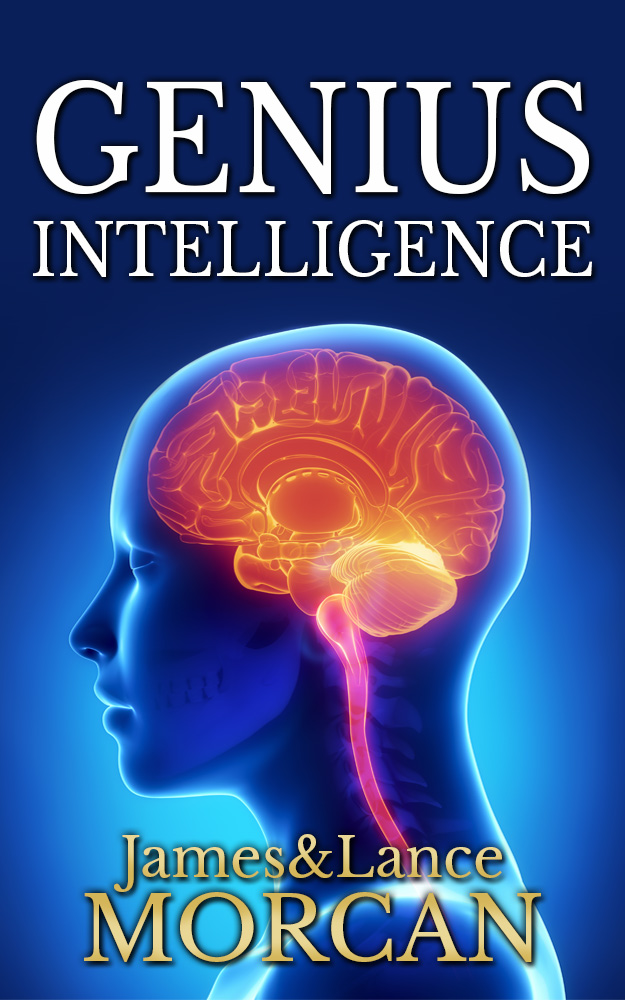 Written by novelists, filmmakers and independent researchers James Morcan & Lance Morcan with a foreword by leading scientist Dr. Takaaki Musha, GENIUS INTELLIGENCE shatters the myth that geniuses are born not developed. It reveals how most instances of above-the-ordinary intelligences are acquired through superior cognitive techniques or brain enhancing technologies.

Renowned geniuses examined include Apple founder Steve Jobs who as a 19-year-old began practicing an ancient discipline that activated previously dormant parts of his brain; Albert Einstein who came up with his great theory of relativity while using a rare method for accessing the subconscious mind; Kim Peek (the real 'Rain Man') who could speed read any book in five minutes flat with total comprehension; Indian mathematical mastermind Srinivasa Ramanujan who, although untrained, created extraordinary formulas that left academics gobsmacked; Wolfgang Amadeus Mozart who composed entire pieces while in a specific altered state of mind.

Among the discoveries shared with readers are brain waves common to geniuses and the various ways to induce those brain waves; mental techniques the world's elite and A-List celebrities are quietly using to help them process information while they're asleep or in virtual worlds; chemical substances students and academics the world over employ to kick-start the brain into overdrive; and cutting-edge technologies business tycoons and professional athletes employ to gain a cerebral edge over their competitors.

Drawing on the latest findings in neuroscience, GENIUS INTELLIGENCE lists dozens of practical methods to increase IQ and speed-learn any subject.


Since its release, GENIUS INTELLIGENCE: Secret Techniques and Technologies to Increase IQ has consistently been the top-selling book in our popular "The Underground Knowledge Series", and the Kindle ebook version has been a regular visitor to Amazon's bestseller lists in the Experimental Education, Education Research and Education Theory categories.

Sales of this book have been boosted by its inclusion in our fast-growing 'Underground Knowledge' discussion group on the Amazon-owned literary site Goodreads.com - the world's biggest online site for books, authors and readers.

Here's what Amazon reviewers are saying about this book:

"I loved how the writers gave examples of who uses which secret technique." -Dr. Denise Tarasuk (author of 'Monsoon Medicine')

"The Morcans challenge the idea that genius comes with birth with the proposal that genius can be developed." -WelcomeHomeSoldier Reviews

"Makes you think, about how you think." -S.J. Hailey

"These things aren’t thought in schools or told by our elders. I would refer it to all the young ones to read this book and maybe they can unlock their IQ. Some new things like Ormus, Hemispheric Synchroniztion, Polygots, Sumperlumial Particle, Speed reading were like shocking stuff to me...Great book loved it!!!" -Shamanth Shivaram

"Are you wanting to give your best in creativity using the 90% of our brains we don't use. This is the book!" -Robert Smith


Having both gone through the traditional education system and finding it laborious and uninspiring, we quickly discovered it was fun to brainstorm alternative and more advanced forms of study for our trilogy. Even so, it took many years of investigating accelerated learning methods – some rare, some not so rare – before we felt confident enough to write about what it would take to create youngsters with intellects as advanced as those of our Pedemont orphans.

All the insights unearthed during that 10-year investigative period (spent examining the great historical minds and studying little-known intelligence boosting methods) are revealed in Genius Intelligence.

Highlights of our exploration into the world of super learning include many fascinating discoveries, which were totally new – to us at least and, we expect, in most cases will be new to you, too – and which were certainly outside our personal experience collectively and individually.

One of the key discoveries we made is that every human brain has enormous potential – possibly even unlimited potential.

No matter the challenging circumstances – whether ADHD, dyslexia or mental illness – it makes no difference when it comes to the brain’s latent potential. The capacity for achieving genius levels of intelligence remains the same. After all, there has been many a genius with learning disabilities, hyperactivity and genetic brain disorders.

The latest scientific studies have revealed extraordinary findings. The brain is much more flexible and adaptable than previously thought. It can evolve and creatively work around limitations and nullify them.