BANKRUPTING THE THIRD WORLD: How the Global Elite Drown Poor Nations in a Sea of Debt by James Morcan, Lance Morcan

Exposing the culture of corruption within big international aid organizations 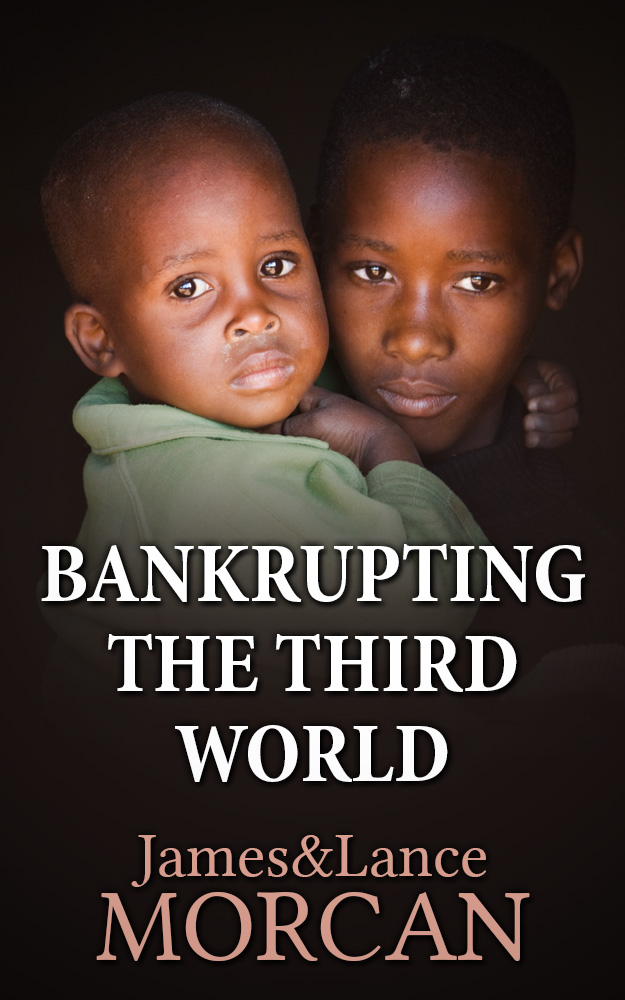 Bankrupting the Third World is dedicated to the impoverished in forgotten places of the world. It questions whether the likes of the World Bank, the International Monetary Fund, the United States Agency for International Development and other big international aid organizations help or hinder the world’s poorest people.

This book also questions whether the aid packages provided are genuine or whether they are scams designed to subjugate Third World countries. It exposes the culture of corruption within the aforementioned aid organizations and the arrogance with which they treat their Third World ‘clients.’

The Morcans reveal there’s a nefarious hidden agenda at play whereby the ‘generosity’ extended by international aid organisations in assisting the development of the Third World and providing relief in the event of natural disasters comes with serious strings attached. Strings designed to fleece vulnerable nations.

The reader is reminded the economic hit men popularized in John Perkins’ 2004 bestseller Confessions of an Economic Hit Man are still alive and well – in Africa in particular.

In writing this book, the authors were motivated by one sickening statistic: 21,000 people die from starvation every day. That’s one person every four seconds!

More sickening is the fact such deaths are unnecessary given there is more than enough wealth in the world for everyone to at least receive the basic necessities of life, and more than enough in the Third World for it to organically sustain itself.

By the time you get to the end of this book you’ll see there’s as much wealth to be found in the Third World as there is in the First World. In fact, terms like ‘Third World’ and ‘impoverished nations’ are essentially misnomers as they imply wealth and resources are limited in these places.


Bankrupting the Third World is book six in our popular The Underground Knowledge Series and seems to resonate with readers and reviewers alike. Sales of the Kindle ebook version of this book have been boosted by its inclusion in our fast-growing 'Underground Knowledge' discussion group on the Amazon-owned literary site Goodreads.com – the world's biggest online site for books, authors and readers.

With a review rating of 4.7 out of 5 stars on Amazon, Bankrupting the Third World is being well received by book critics.

Here’s what Amazon reviewers are saying about this book:

"A convincing story of what the bankers do best, screwing their clients. A sad reflection of human society. The book should be required reading for all..." -Peter Jones

"A thought-provoking, interesting, compelling read...This book questions whether the likes of the World Bank, the International Monetary Fund, the United States Agency for International Development and other big international aid organizations help or hinder the world’s poorest people...Some of the findings may be a bit shocking to readers. -Sheri A. Wilkinson

"A great book to read and one that will challenge you." -Lynelle

"For me, this sixth book in The Underground Knowledge series is the most important one, alongside the preceding book ‘International Banksters’, which it feels like it goes hand in hand with. There’s a lot of hard facts in these two books and the authors don’t shy away from telling it how it is." -Harry Whitewolf


This book is primarily about international aid organizations and whether they help or hinder the world’s poorest people. The outfits examined include the likes of the World Bank, the International Monetary Fund (IMF) and the United States Agency for International Development (USAID).

Officially, these financial relief organizations aim to reduce corruption in the Third World and Developing nations as part of their detailed and complex poverty alleviation mission. Their main strategy is providing loans to such nations for extensive development programs.

However, according to our research and that of many others – economists, human rights activists and independent investigators included – there’s a nefarious hidden agenda at play. An agenda that even many of those working within these organizations, especially low-medium level employees, are not remotely aware of.

This book is divided into two sections.

Part One, titled The Macro of Looting the World’s Poor, exposes the culture of corruption within international financial aid organizations and the arrogance/disdain/contempt with which the Management of these agencies treat their Third World ‘clients.’

In Part Two, titled The Micro of Looting the World’s Poor, we put two Third World nations under the magnifying glass to reveal the long-term impact of being the recipient of substantial financial aid from the West. The resulting debt accrued by these nations may surprise even the most skeptical reader.