The Elven Alliance by J.A. Culican

Cole’s human life is upended on his 18th birthday when he discovers his true dragon heritage and the prophecy that awaits him. Can he rise to the challenge? 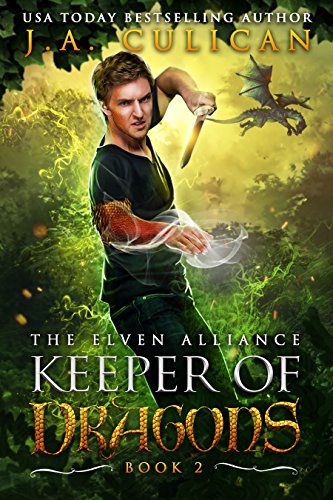 The fates have spoken.

Cole and Eva are the Keeper of Dragons - the only ones who can save all true beings from a time of fear.

Cole finds himself unstable, unpredictable and volatile. He has no control of the tillium-fairy magic he stole from the farros. Out of options, the dragons turn to a once ally - the elves - for help. Curious about the dragon who wields both dragon and fairy magic, they accept - but on their terms only. The dragons must submit to Prince Gaber and his rules.

Queen Tana continues to haunt Cole's dreams, as a new enemy shows his face - another fallen enemy with a bigger agenda than the farros-fallen fairies; an enemy stronger and smarter; an enemy with an army that could destroy all true beings. Enter King Eldrick of the eldens.


Bam! My back slammed against the floor for what felt like the hundredth time this morning. My ears rang as I dragged myself back to my feet, glaring at Jericho. My body ached everywhere. We had been at the Woland training facility for the last three hours. It consisted of three separate levels, and as you graduated one, you moved up to the next. Once you reached the third floor or level, you were considered a trainee for the Woland guard. Jericho was determined to make me a Woland warrior, but had so far only succeeded in making me a laughing stock among the other young hopefuls; I had been unable to move off of ground level. Hence the fact that I was still stuck on the ground floor.