Thanks a Million [The Billionaire's Revenge] by Dee Dawning

As far as Billionaire, Stuart Wynne is concerned, Fallon, is the girl who got away. 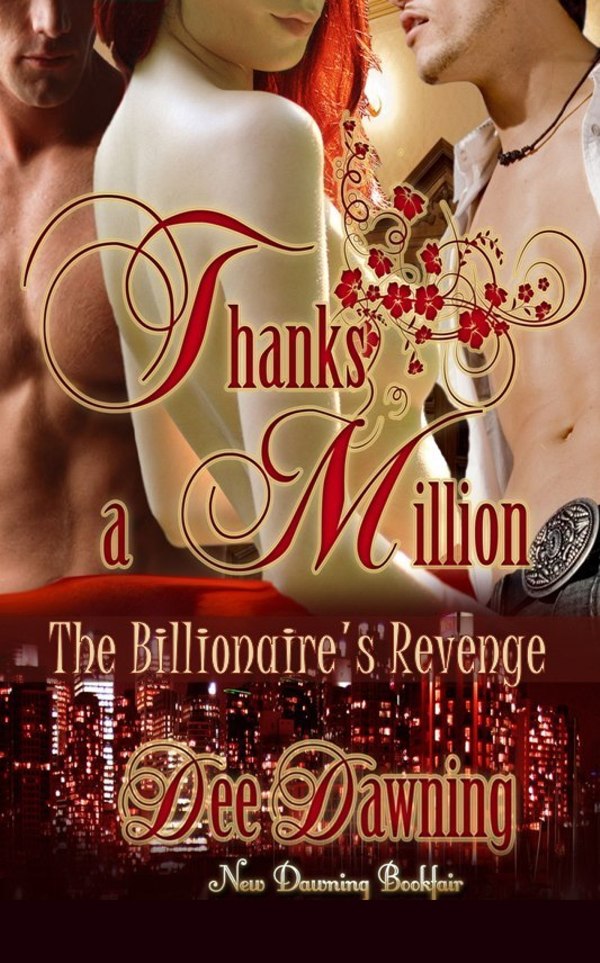 As far as billionaire Stuart Wynne is concerned, Fallon, is the girl who got away. While Stuart is preoccupied with another woman, Fallon is swept off her feet by a lowly pit boss. After a whirlwind courtship with the devilishly handsome, Dana Allen, Fallon marries him before Stuart even realizes anything’s amiss.

Done deal, right? Maybe, but never count Stuart out. As a master card player, he has yet to play all his cards. Starting at the annual hotel Christmas party, Stewart’s plan unfolds. Using money, sexual fantasies and maternal instinct as his tools to drive a wedge between the unsuspecting couple.

Will it succeed? Stuart bets millions it will.


Stuart Wynne, CEO of Wynne enterprises, raised his commanding baritone voice. “All right Fallon, you made your point. Are you ready to come back?”

She’d accompanied Michelle to the study part of Stuart’s opulent penthouse. Where Michelle had gone, she had no idea. She studied Stuart, tall with deep blue eyes and short dark hair with a touch of gray. She’d gone with him for two years when she was principal show girl and really loved him…or his money, she couldn’t be sure. Regrettably, at the time, he belonged to someone else. Now, though she was tempted, she couldn’t—she'd married Dana. He’d warned her that Dana was a loser, but she’d been in heat. He was so gorgeous, like a movie star. “I can’t. You know I’m married.”

Stuart rolled his eyes and sneered. “Humph! To a dealer, what’s he make? A hundred grand?”

At Stuart’s sarcastic inquiry, her vision wandered past Stuart to the bright lights of the ‘Las Vegas Strip.’ “Eighty,” she replied casually.

As she took a seat, he repeated her answer, “Eighty?” and laughed derisively. “I make a thousand times that. See, he’s not even a good dealer. Is he any good in bed?”

Her gaze shifted back. Her nostrils flared in annoyance.  He’d gone too far. “Yes, the best sex I’ve ever had.”

He raised a skeptical eyebrow and cupped his chin with his left hand. “Really, at least he’s good at something. Maybe, I underestimated him. How am I?” He asked.

She uncrossed her legs and sat up. “A gentleman would never ask that of a lady.”