Short story: A father and son fishing trip takes a turn for the worse 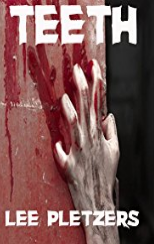 Taking his son fishing shouldn't have turned into a nightmare...but it did.
A creatures from an unknown region escapes the gate keeper and is caught by a little boy out fishing with his dad...and all hell breaks loose.


Dark clouds blanketed the sky dulling the afternoon light. My feet dangled off the edge of the dock. The day hadn’t turned out sunny like I hoped, but it was warm despite the clouds. Summer was in full swing, and it brought humidity by the bucketful. My shirt hung open, while my son's Simpson shirt lay discarded on the dock, next to the fishing tackle. Joe was only six and the rod in his hands looked enormous. His gaze was fixed on the softly lapping water. Poking out of his pants pocket was a plastic bag for our catch. It was still empty.

The end of my pole bobbed. I checked on the floater, it dipped under the water and quickly sprang up and rested on the soft currents of the ocean. Damn. Bet the bait is gone.

"It's a big one," I said. The rod was seriously bent and jerked left and right. "Need a hand?"

Joe's face was a tight grimace of concentration; beads of sweat spotted his forehead. "Nah," he said. "I got this mother."

I blinked, unable to believe what came from his mouth. "Excuse me?" My tone was a mixture of surprise and shock and it carried a warning.

I was fine with that.

The rod went still, but it remained bent like a crippled man. The fish was motionless, not even the line moved, held taunt in a straight line. The seagulls were silent. They hawked all day until now. Scanning the sky and the rocks on the other side of the bay near the point, I couldn't see a single feathered fiend or friend. The clouds too were without motion. Everything was still, even the air. Something was wrong. I felt it deep inside churning my gut and twisting my nerves into knots.