Imagine a world where the famous monsters of legend exist among us. 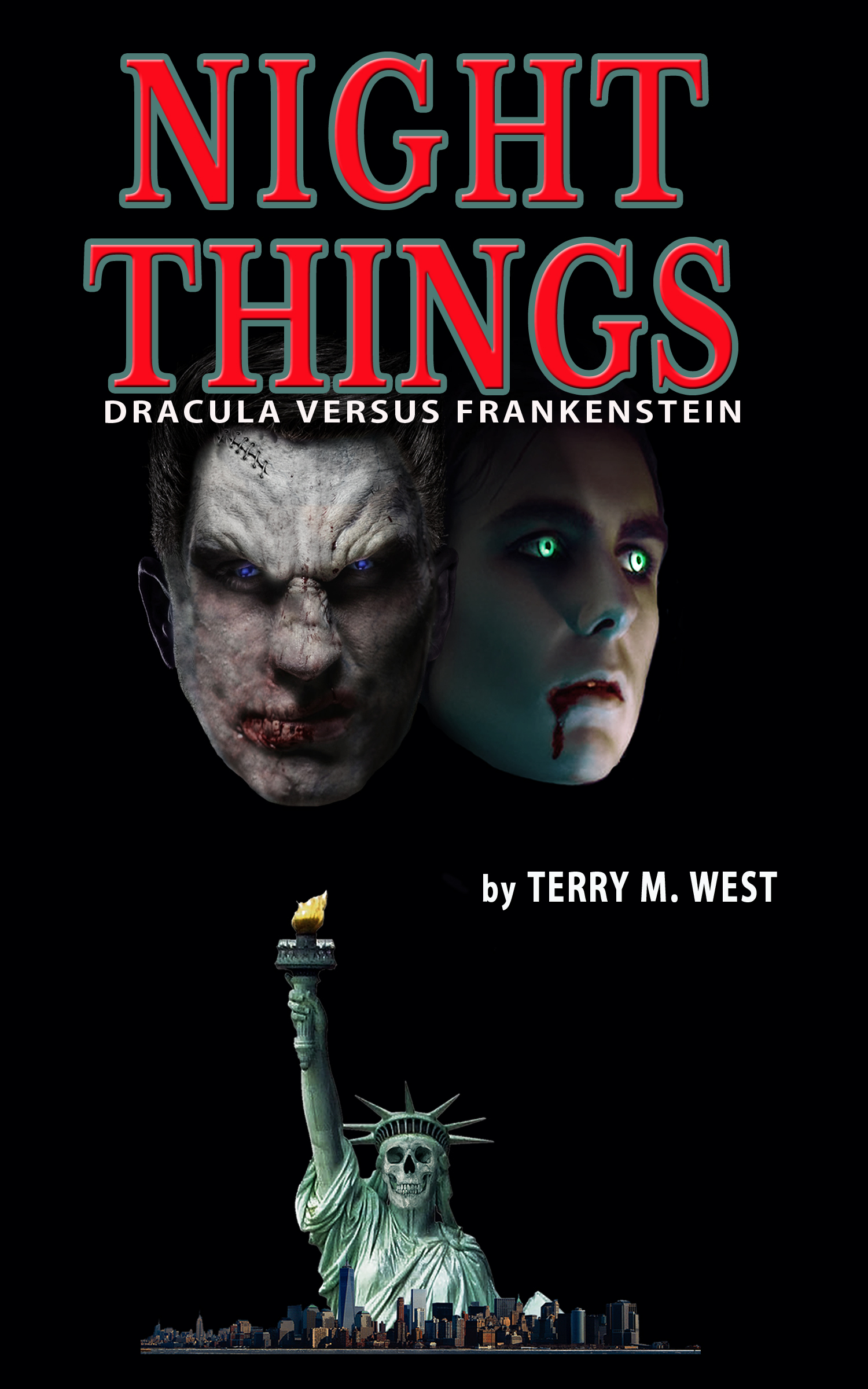 This novel spans several centuries, following the relationship of the two most iconic monsters in literary history. Once as close as brothers but now sworn enemies, Bram Stoker's Dracula and Mary Shelley's Frankenstein meet for a final showdown beneath the streets of New York City.
Night Things (Dracula versus Frankenstein) takes place in a world just like yours with one startling difference: every creature of legend has stepped forward from the shadow and they now exist shoulder to shoulder with humankind! New York City has become a macabre melting pot. Vampires, werewolves, zombies and ghouls are now the new immigrants and they are chasing the American dream. The Night Things have become part of the system. But many humans feel the creatures are dangerous ticking time bombs.
Dracula, considered the messiah of the Night Things, builds an unstoppable army as he plots to wipe humanity from the face of the earth. The mysterious New York crime boss, Johnny Stücke (the creation of Frankenstein) wants to keep the peace between the Night Things and humanity. Stücke fears total extermination of his kind, should Dracula unleash his forces on New York.
The fight for the night begins.
Critically-acclaimed horror author Terry M. West continues his Magic Now series with this standalone novel that presents a world only a slight shade darker than our own.

Praise for Night Things: Dracula versus Frankenstein:
"Night Things won't disappoint. It's pure fun for those of us whose love of monsters from legend and the screen runs deep."-Jonathan Reitan, Scream the Horror Magazine
"A contemporary spin on a pair of classic characters with a dose of Lovecraft--riveting action and enough plot twists to make Stoker and Shelly rise from the grave."-Timothy Hemlin, author of The Wastelanders
"Night Things is populated with familiar monsters given new life, meaning and motivation by the skilled pen of Mr. West."  -Parlor of Horror
"Dark, violent, quirky and inventive, Terry M. West's Night Things: Dracula versus Frankenstein features all the horror icons you love, casting them in a new light and adding dimension to their personalities and histories. Highly recommended."-Horror Novel Reviews
"A solid horror novel that doesn't shy away from the darkness. West's monsters are of the vintage variety, true to their literary origins, while the story itself forces you to think about the nature of good versus evil, and monsters versus man."-Beauty in Ruins
"Night Things is another amazing work of horror fiction from one of the best minds in the game.  This is a horror story for horror fans."-Horror Society
"There's really no other way to state it: Night Things is a sensational book."-author DS Ullery
"Most highly recommended to all fans of modern horror!"-Fans of Modern Horror
"You'll fall in love with Night Things."-Texas Terror Entertainment


Night Things: Dracula vs Frankenstein has landed at the #1 spot on Amazon numerous time in the horror classics category. It has been read by thousands of English speaking horror fans. It is currently ranked 4.4 out of 5. Night Things is currently being shopped by Council Tree Productions as a potential horror series.

Many, many years ago

The creature sought warmth near the fire. Night had fallen on the ice and this cave in the frozen mountain would serve the monster well as a new sanctuary. His old cavern had been buried that day by an avalanche. He had lost little; a bed he had fashioned from branches and dead leaves and a worn fishing spear. As he sat near the fire, he used a rock to sharpen the end of a thick branch and fashion a new lance. He had snapped the limb from a large tree near the tundra. The fiend with no name had also hauled a parcel of firewood from the timberline to birth flame and warm his new home.

He was hungry, but the blistering wind at this time of night would cut even his strong hide. He would ice fish at dawn.

This frozen hell continued to test him, and the cold always soaked his bones; even near the blaze of a campfire. There was no idea in him of how long he had existed in this bleak place. It could have been weeks, years or centuries, for all he knew. But it was quiet here. Quiet and too dangerous for man to intrude.

He looked to his hands as they performed their task. Both had been harvested from strangers and sewn to forearms that he merely borrowed. His body was composed of orphaned parts and he often wondered about their origins. The stick was sharp enough to pierce scales, so the monster set it aside and warmed his uneven hands on the fire.

When he could feel them again, he ran them gently over his face, feeling the scars that no longer bore laces. They had fallen out long ago but he still felt them, hooked beneath his skin. His long, dark hair rested on his shoulders, warming them. He wore a polar bear skin over his clothes that were irredeemably filthy.