Megan and the Lost Cat by Owen Jones

Megan uses her powers to find a lost can and becomes friends with its influential owner. 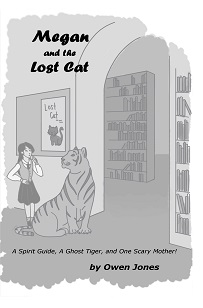 Megan and the Lost Cat

In this episode, Megan reads about a lost cat called Smokey. She feels very sorry for the cat and his owners. She fears that the cat has been injured, so she begins a weekend of search.

A mysterious girl in the local woods gives her a strong clue as to where Smokey is so Megan investigates. When she reports back to the cat's owner, a Mrs. Williams, Megan gets a big surprise, which changes her life considerably.


Sales of a series depend on accurate translation and the promotion of the first volume. It is hard work, but can be very profitable if you can locate people who like the theme.

Megan was intrigued by the talk Wacinhinsha and Dr. Jenkins had given her the other night on communication, and so, like most people, she wanted to talk about what was uppermost on her mind.

“Mam, what do you think about communication?”

“Pardon? Communication? On the telephone, you mean? I don’t know much about mobile phones, my dear?”

“No, I don’t mean mobile phones themselves, I mean just talking, really, and body language… That sort of thing.”

“You’re not going to start all that nonsense about Auras again, are you?”

“No, not if you don’t want me to, but that is a form of communication too, like body language and intonation and mood. It is all part of communication, as is speech. In fact, it may be even more reliable than speech, because people can tell lies and hide their true feelings very easily, but they cannot hide what they cannot control.”

“That’s as may be, but I don’t believe in the Aura, stupid lights and ghosts and things.”

It was the first instance that Megan had had to practice what Wacinhinsha had taught her in the company of an accomplished liar. Megan could see by her mother’s Aura that she was telling lies, but there was something else too. She was not lying to be malicious, she was lying to herself because she was afraid of admitting to herself that such things existed, despite the fact that she knew that they did, because she too had had first-hand experience of them, but it had been ‘frightened’ out of her by her mother thirty-odd years ago.