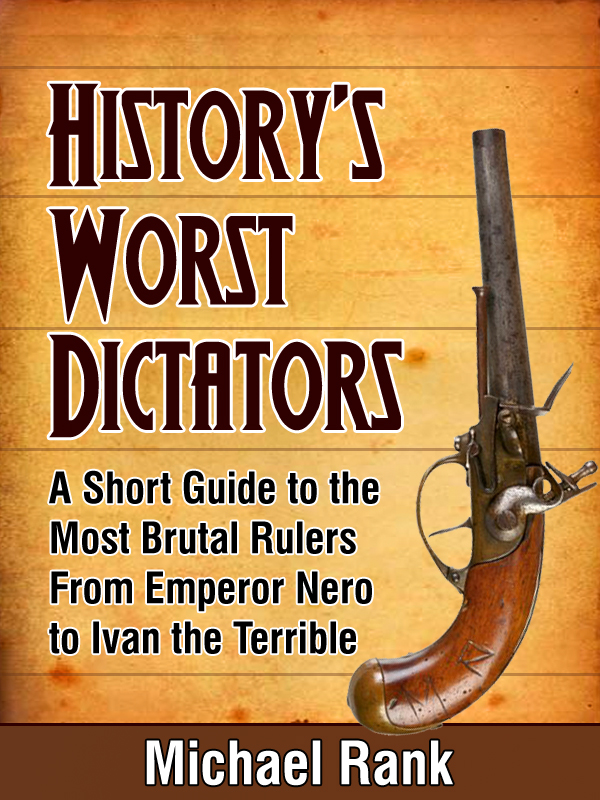 This is the way English philosopher Thomas Hobbes described the living conditions into which humans inevitably fall without a strong, central authority. However, Hobbes would agree that living under a brutal dictator could lead to the same conditions. He would know -- he lived a century after the bloody reign of Henry VIII, 150 years after Spanish conquistadors witnessed Montezuma II offering up thousands of human sacrifices, and four centuries after Genghis Khan rode throughout Eurasia and left behind enough death and destruction to depopulate major parts of the globe.

This exciting new book from historian Michael Rank looks at the lives and times of the worst dictators in history. You will learn about their reigns and violent actions, such as...

- Emperor Nero's murder of family members, suspected arson of Rome, and widespread execution of religious minorities, which caused many early Christians to believe that he was the Antichrist

- Herod the Great's use of crowd slaughter, family killings, and even infanticide to hold on to his rule

- Vlad the Impaler (also known as Vlad Dracul, the namesake of the vampire) and his use of impalement to kill more than 20,000 victims, even causing a superior army turn around and avoid fighting him when they witnessed his carnage

These four leaders and six others from ancient, medieval, and early modern history fill this book. Learn about how they earned their reputation as the worst dictators in history and why they are so infamous in popular culture today.


This book has been on sale for nearly two years and sold thousands of copies, peaking at 1,200-1,300 in the Amazon rankings

In 2011 a team of ecologists from the Carnegie Institute made a startling discovery. They determined that an event between the 13th and 14th centuries caused such widespread death and destruction that millions of acres of cultivated land returned to forest, causing global carbon levels to plummet. This event was bigger than the fall of China's Ming Dynasty or even the Black Death. The team said this event was not produced by nature and actually the first, and only case of successful man-made global cooling. It was not hard to guess who was responsible: Genghis Khan and his descendants triggered 40 million deaths in this period, making him one of the bloodiest, and ironically, the greenest, dictators in history.

Through his battles and systematic slaughter, he removed 700 million tons of carbon from the atmosphere, equivalent to the amount released from one year of gasoline use today. Massive depopulation in the domains of his conquest, which covered 22 percent of the earth, resulted in the return of forests and their scrubbing of carbon from the atmosphere. While most environmentalists of today would not approve of his methods (except for some neo-Mathusians such as Sir David Attenborough, who in January 2013 lambasted humans as a “plague on the earth”), they cannot deny that his methods achieved what carbon offsets and gas mileage standards have not. How did a tyrant whose influence was felt all the way through the earth's atmosphere rise to power and accomplish such far-reaching results?