Accused of murder, Lanie and JD race against time to prove her innocence 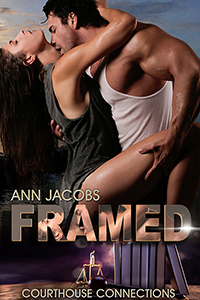 A rainmaker for a prestigious law firm,

JD Ackerman may be known as the “King of Torts,” but he’s not even in the game when it comes to love. Since the death of his wife, his life revolves around work.

Lanie Winstead isn’t scoring touchdowns in the happily-ever-after department, either. Estranged from her senator husband, she’s biding her time until the upcoming election’s over so she can file for divorce.

Lanie’s husband is murdered, and she’s the prime suspect…

The only hero in sight is JD. As they race against time to prove her innocence, the discover passion and love is possible…

Even when you’ve been FRAMED.


Book 8 in my popular Courthouse Connections series, this book is to release 1/3/17. Advance reviews so far are very positive. FRAMED will be put out in print soon after electronic release, and significant effort will be put into promoting it.


Everybody seemed to have paired off after the morning session, most of the lawyers combining a weekend of continuing education at this luxurious beach resort on Key West with a mini-vacation with their families or significant others.

Lanie Winstead sighed. She still had a husband, legally speaking, even though they’d been separated for over a year. That didn’t mean, though, that she’d come down here looking for a new significant other.

The marriage that had begun with her foolish hope that it might grow into a love match had been over long before she’d moved out of Wayne’s house and into her own apartment. Adrift, on the cusp of hitting thirty, she had no immediately pending cases at the Tampa satellite office of Wayne’s firm. She’d signed up for this continuing education seminar primarily to occupy time while fulfilling the Florida Bar’s continuing education requirements.

Over a year ago, Wayne had given his blessing for her to go her own way while he went his, but she hadn’t taken him up on the invitation. Lonely in this subtropical paradise, she envied the couples around her, whose happiness they seemed to take for granted.

Alone. That’s how she felt now, but it wasn’t all that much different from the way she’d been before the separation, envied for being married to the popular state senator. All the time she’d felt trapped, forced to take care that no one would guess they lived separate lives except for the public moments they shared in the limelight of political rallies and other media events.

Restless, she finished the fruity drink she’d been sipping and headed out for a walk along the beach. Unlike some of the unescorted women she’d talked with during breaks in the seminar schedule, she hadn’t come alone to troll for a bedmate. Not that she couldn’t, of course. Even before she’d moved out...