What can a fairy godmother-in-training do when Cinderella refuses to go to the ball? 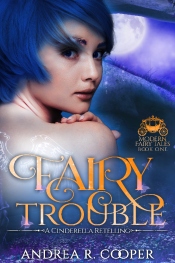 Why, go along in Cinderella's place of course!

But falling in love with the prince's brother was never meant to happen. Soon a series of events into motion that will impact not only her career but also her entire life.

The problem is, she doesn't know if the prince's brother feels the same about her as she does about him.

And giving up her wings on the chance that he might care about her in return seems reckless and foolish to the usually by-the-book Esmeralda.

Still, becoming human might be the only chance for Esmeralda to reach her own happily ever after.

I've been down to #44,000 at Amazon with Newsletter swaps with other authors

This book was with a publisher, but I got my rights back and a new cover. Only have 1 ranking transfer over so far, but the book re-released 6/18/2018. 5-stars so far


The aroma of fairy dust and wildflowers swirled around Esmerelda as she took her place in line and breathed in deep. Finally. Her chance to become a permanent fairy godmother instead of a substitute had arrived. She had to help her charge to fall in love, whoever he or she was. Her clenched hands crinkled her periwinkle skirt as she drifted closer to the retiring godmother. If Esmeralda didn’t botch this trial run, like the last one she did two hundred years ago, her promotion would be set. Otherwise, she’d go back to cleaning dew off blades of grass, which was dull, dull, dull. She wouldn’t even think about failing.

She straightened her shoulders, her wings beating faster than her heartbeat. Win this, and I can mingle among humans, even smell their delicious food. Her mouth watered at the thought of sweet icing and flaky baked goods. She’d work her wand off to get this job. Besides, Fanny, the retiring fairy godmother, had been the original one to the Cinderella in the fable and it was time for new wings. Esmeralda stepped up as the fairy in front of her gave a squeal of delight and vanished behind a rose bush.

Esmeralda straightened her shoulders and marched up to the ancient fairy whose once white-blond hair was mostly gray.

“This assignment might be tough, but I think you will persevere.” Fanny gestured to her with the sealed scroll.

Unease coiled tight in her belly. She couldn’t fail, not again, but she couldn’t make herself reach out and take the scroll either. Just what was this assignment that Fanny was worried about her taking it? Or was it Esmeralda’s past screw-ups that had Fanny cautioning her? Fanny’s violet eyes brightened with mischief. “I want to enjoy my retirement flapping around the Mediterranean and chasing half-naked men