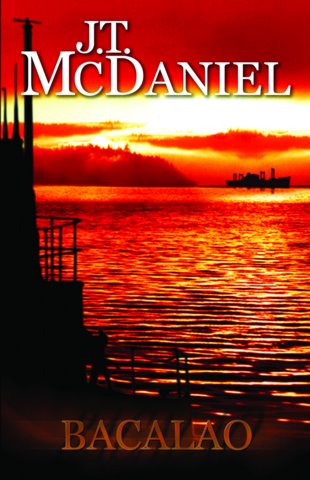 “J.T. McDaniel takes the helm with the steady hand of a master at the top of his game, creating an accurate and fascinating depiction of daily life aboard a diesel attack submarine in the 1940s. From the builder’s yard in Connecticut, to white-knuckle combat in the Pacific Theater, to the heart pounding thunder of exploding depth charges, every detail rings with authenticity. McDaniel writes with the technical precision of Tom Clancy, the pacing of Michael DiMercurio, and the human comprehension of Edward L. Beach. A reader simply cannot ask for more.”

Bacalao follows a Gato class American fleet submarine from the Electric Boat Company building yard in pre-war Groton, Connecticut, through training, the Japanese attack on Pearl Harbor, and into the heart of the Japanese Empire. From Pearl Harbor to Fremantle, the brave little boat and her crew tackle a determined enemy, and their own bureaucracy, to bring the war to the enemy.

And through it all, Lawrence Miller is there, slowly rising from fourth in the boat's officer roster, departing for a tour in command of an ancient S-boat in Alaska, and finally returning to Bacalao as her last commanding officer.


Published in 2004, with sales over 4,000 copies in hardcover, trade paperback, and Kindle. Currently available in trade paperback, Kindle, and ePub editions, as well as English language audiobook.

"Miller climbed up beside Laurence and focused his binoculars on the proper bearing. More of the enemy's mast was visible from there, and he could make out the upper part of the bridge structure. Several antennae were strung from the mast, and he could just make out some men perched  on a narrow platform just above the bridge.

"Target is some kind of warship. Sub chaser, maybe."

Miller dropped back down to the bridge.

"Damned right. We'll see if we can close to within torpedo range before he sees us. With luck we can put a couple of fish into him."

"Those little ships are pretty shallow draft. We'll have to set the torpedoes to run at minimum depth. If his lookouts are any good he likely to spot the wakes and come after us."

Miller shrugged. "We'll have to take that chance. It doesn't look like he's seen us yet. At least, I hope not."

He clipped his binoculars into the TBT and bent over to take a bearing. An S-boat TBT was more primitive than the one on a fleet boat, but it worked well enough. The target was still centered on the submarine's jackstaff, just as nice as anyone could want.

What he had to consider was the possibility that the enemy ship had seen them, and was deliberately sailing a converging course, waiting for them to come within point-blank range before opening fire. The hunter often became the hunted in this business.