Explains the causes,course and consequences of 1857 Indian war of Independence,also known as Indian Sepoys' Mutiny 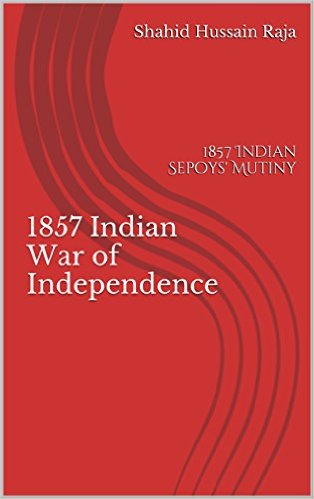 Explains the background of the 1857 Indian War of Independence or what a section of writers call 1857 Indian Sepoy's Mutiny,enumerates in detail the social,economic and political causes of this momentous event,narrates the course of events,reasons of its failure and ends with a detailed analysis about its long term and short term impact.Argues that many of the present day trends in India,Pakistan and Bangladesh have their roots in the policies adopted by the British administrators in the aftermath of this uprising.


New Publication;not yet high on ranking


On April 27, 1857, eighty-five soldiers of a Bengal regiment of British East India Company, posted in Meerut, disobeyed the command to use the new cartridges for newly introduced Enfield rifles, allegedly encased in cow and pig grease. Harsh punishment meted out to the disobedient soldiers, and that too in front of their colleagues, resulted in the mutiny of several regiments and ultimately became a general uprising of the Indian people. It was ruthlessly quelled by the British with the help of their superior technology and support of local elites. However, like any cataclysmic event, it gave birth to different social, political and economic trends which are still shaping the course of events in the post-colonial states of India, Pakistan, Bangladesh and other countries of the Indian Subcontinent.

Several names have been given to this momentous event, depending upon which perspective one looks at it from ranging from the War of Independence to Indian Mutiny, the Sepoy Mutiny, the Rebellion of 1857 and the Revolt of 1857, to name a few.To the British public, state and scholars it was just a mishandled case of Mutiny of a few soldiers in a regiment of the Bengal Army of the East India Company. To the nationalist Indians, it was the first war of independence launched by the subjugated people of India to get rid of their European colonial masters. To outsiders it looks more like the Civil Rights movement by a public against the bad governance of a private firm running an Empire. Whatever name one gives it, the event is an important milestone in the history of India's independence and of the Indian Muslims’ struggle for a separate homeland. William Dalrymple, an authority on the British Raj in India, has aptly described it as an Uprising in his masterpiece account of the last days of the Mughal Empire—the Last Mughal.