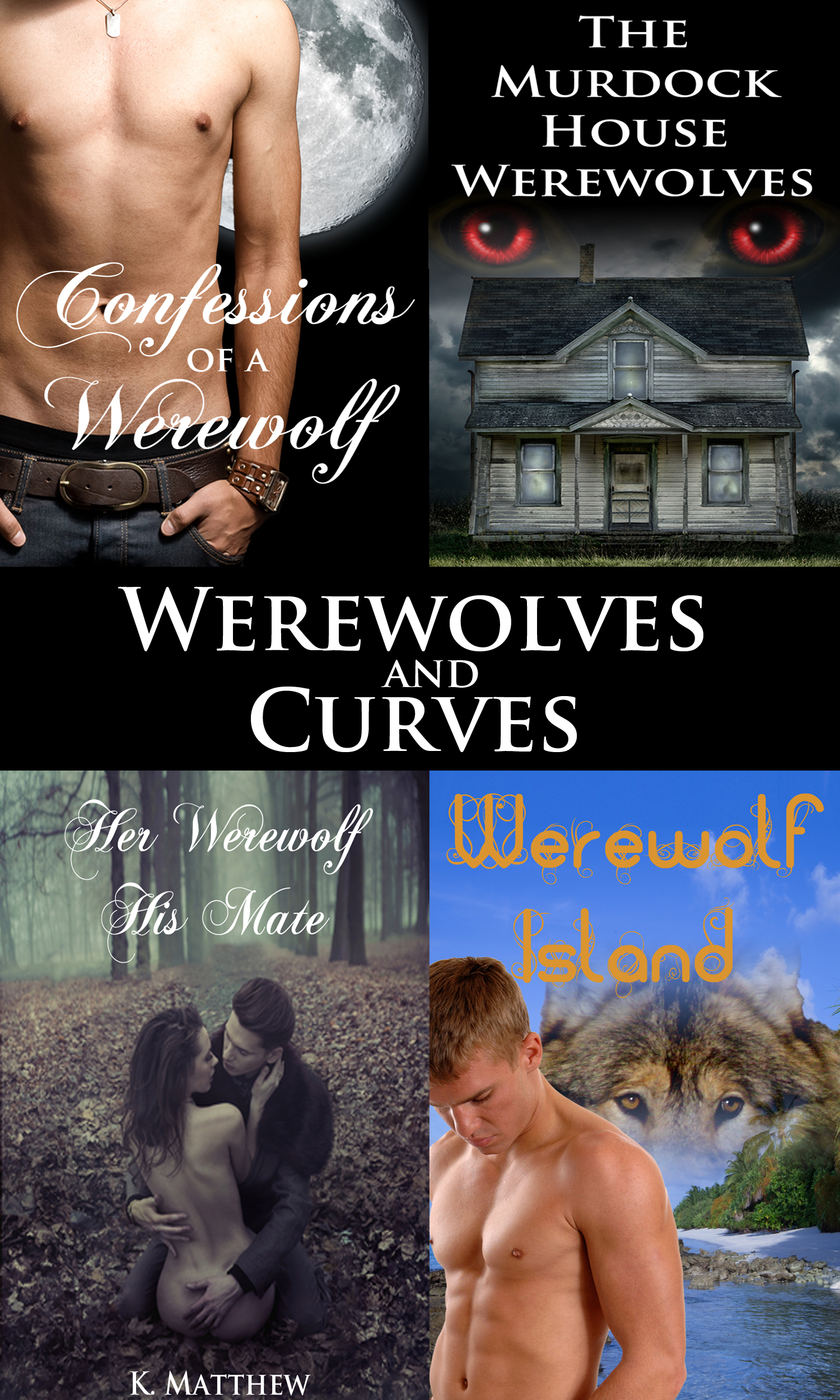 Enjoy four titillating tails of hunky werewolves and their curvy lovers. This bundle consists of four stand alone short stories that delve into the sensual darkness of human desire.

Stories in this bundle include:

Confessions of a Werewolf
The Murdock House Werewolves
Her Werewolf, His Mate
Werewolf Island

Confessions of a Werewolf
Meg Connelly has heard a lot of interesting things as a psychologist, but none so interesting as the story of Remy West.

At first, she thought his talk about being a werewolf was ludicrous, but clinical lycanthropy isn't such an uncommon thing.

Wanting to be a good doctor, Meg decides to put all of her effort into helping Remy get over his wild delusions. But when she's brought face to face with the wolf, she learns that his delusions are the least of her worries.

Spirits aren't the only things that lurk in the Murdock House though, Amber soon discovers. The creatures within bring a different kind of horror, and they're hungry for more than just a lost soul.

Her Werewolf, His Mate
It was said that when a werewolf found his mate, it hit him like a ton of bricks. Nothing could come between them. All he could think about was her. She would be the center of the world he revolved around, and nothing would stop him from claiming her.

Justin never paid much mind to the legend until he ran into Marisa in the forest. Now every instinct inside of him is screaming to make her his forever. There's another man in Marisa's life though, and Justin will have to deal with him before he can claim his mate.

Werewolf Island
In the kingdom of Fieldedge, prisoners sentenced to death are sent to Werewolf Island, a cursed place where giant beasts devour their human prey. Standing on the rocky shore, watching the ship sail further out of reach, Meera can't think of anything but the hopelessness of her situation. She's overweight, slow, and weak. Few people would make an easier meal for the wolves.

The gong on the fleeing ship sounds off like a dinner bell, and every werewolf on the island is alerted of Meera's presence. However, her luck seems to turn when she's rescued by a gorgeous stranger. But is this hero what he appears to be, or is he really a wolf in human's clothing seeking a different kind of flesh?


I can remember the first time I spoke to him as if it was yesterday. Never before had someone sounded more desperate and frightened on the phone.

“I need to see you now,” he said shakily.

“Sir, if this is an emergency, then I'd advise you to call 911,” I told him, wondering what could make a person so panicked.

“911 isn't going to help me. I just need to speak to someone. I can't keep this bottled up inside any longer.”

“What is it that you would like to see me for?”

“I can't talk about it over the phone.”

For a moment, I thought about rejecting him. Most of the time, potential clients who called for my services were calm and collected, wanting to schedule an appointment to discuss things they had been stewing about for a while. This phone call, however, sounded urgent, as if he had just done something bad and wanted to confide in someone about it. Maybe this man was dangerous. There was no way to tell if I couldn't get him to talk.

Against my better judgment, I went over my rates with him before scheduling an appointment. For as urgent as the call had sounded, he seemed to have no problem with waiting a few days to see me.

“I don't care how much it costs. I just need to know you won't tell anyone the things I plan to talk about.”

“Anything you disclose to me will be held confidential, sir.” Within reason. Of course, if he had killed someone, I would be going straight to the police. There were some things even psychologists couldn't keep secret.

He seemed to calm at this. “Thank you. I'll look forward to meeting with you.”