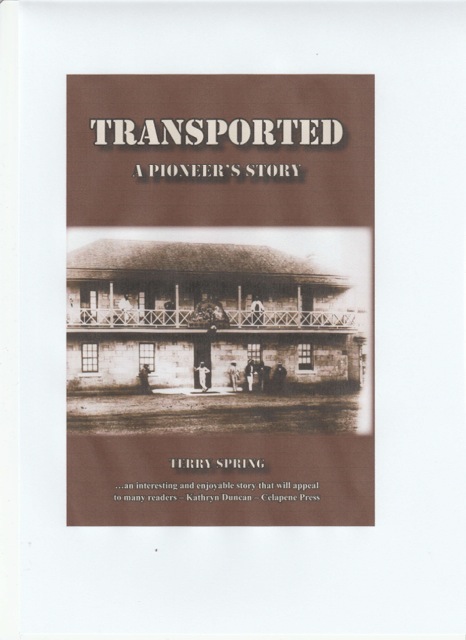 Written as a novel, Transported is composed of known facts of the life of George Smith, a convict transported to the colony of New South Wales, combined with research into how white people lived their day-to-day life in the new colony, in the 1800s. His story tells how he became the first white man to survive in the unexplored Dubbo countryside, marrying an Aborigine and acknowledging their children as his own. These were acts not conducive with the white population's thinking of the time. He rose from these humble beginnings to become the pioneer and wealthy Australian landowner known locally as  'Dusty Bob'.


As a self publshed book, this has sold well - 3000+. It sells in many book shops in Australia, is in Australian libraries, from my web-site and Amazon.


If he wasn't to starve George knew he would have to go and steal something. He would just have to shut the door on the village teachings and guilt…he needed to eat. In truth, this would mean he'd failed to keep his oath ―to stay honest. But isn't God supposed to provide if you're a good person? That's what he'd been taught, but God had let him down. Nobody's going to give me work…they treat me like vermin…might as well do the same as the others.

In Silver Street, he cautiously surveyed two adjoining shops. Alternating between the two, only one woman served. Pretending to shelter from the rain, he watched and patiently waited. A customer entered one of the shops and the saleswoman followed, leaving the other shop unattended. Breathlessly, George darted inside. Quick, grab something and get out, he thought. His outstretched hands were shaking. Hell, everything's under glass.

His eyes were drawn to a glow of firelight coming from the owners' parlour leading off the shop. George could hear his heart thumping loudly as he skulked into the well-furnished room. It was unoccupied. He breathed a sigh of relief and looked round furtively. On a polished wooden side table stood a bowl. In it sat a gold watch and other small shiny gold items.

Heart pounding, he darted forward. Scooping up the valuables he quickly thrust them into his pocket. In a panic, he turned to hurry away through the doorway; out through the shop into the street to freedom …except…the owner blocked the entrance. She stood in the doorway. Hands on hips, she guarded his way out. Petrified, his heart leap even higher till he felt it in his mouth. Unable to breathe, flustered at being caught, George fought to stay calm. The woman started to shout. Her voice boomed loud… accusatory… angry.