When the Seeds of Revenge Blossom! 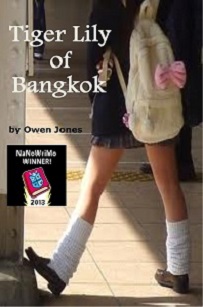 Lily was born in a quiet village in north-eastern Thailand, near the Mekong River and border with Laos, into a Chinese-Thai family of shopkeepers. She had a very happy childhood, until at the age of eleven an old family friend, who helped her parents out in the shop, started abusing her.

The next time he touched her, she offered to do what she had seen in the film. The man jumped at the chance. Lily bit his penis off and fed it to the chickens in the yard.

However, this only changed one form of torment for another, because people now shunned her, shocked by what she was capable of. She became an outcast and counted the days to when she could leave to study in Bangkok, using the compensation money from the abuse to fund her tuition.

She knew no-one in Bangkok and was not used to big cities, so she soon fell pray to a variety of men, whom she went with for the companionship and the money, since it was clear to her that what she had thought was a fortune in the village, would not be sufficient to fund her years at university.

She has five regular boyfriends, but doesn’t like any of them and suspects that some of them are perverts too, because they like her to dress up as a schoolgirl, a role she can easily carry off because she is short and slight of frame – petite. She could easily pass for thirteen without make-up even when she was eighteen.

Most of her boyfriends liked her to look thirteen.

One day something snaps in Lily and she seeks to pick up a pervert. She goes back to his house and kills him. This becomes a weekly event until she decides to pick off her boyfriends one by one too.

In the midst of all the killing, she meets a nice boy at university, who seems to really like her. She is surprised, because she finds that she likes him too, the first one in her life and she spares her last boyfriend, although she does dump him.

Bangkok is terrified, the murders are discussed on TV and in government circles.

However, Lily does not get caught, but she throws her persona into the canal along with a bunch of Tiger Lilies, one of which she had left at each murder scene.


Tiger Lily of Bangkok is a very popular book, especially with English-reading Western visitors to Thailand. I would like it to reach other nationals too. Now with a sequel.

Lily was lying in the bath, the water as hot as she could bear, soaking for ten minutes and then scrubbing her skin for ten minutes more before repeating the cycle over and over again. She was trying to remove the smell of ‘pig’ from herself. That was what she thought it smelled like anyway and she couldn’t think of a viler smell in all the world. She was starting to become obsessed with it or many would probably say that she already was obsessed, but she couldn’t help that any longer. If there had been a time to conquer her obsession, it had long since passed.

So, now she was stuck with it no matter how long she soaked or how hard she scrubbed.

In the beginning, she had changed her name often in the hope that a new name would somehow cleanse her, but that had not worked either. She had been very superstitious, like many people from the countryside, but she was less so now, having seen that nothing seemed to help her odiferous predicament.

She thought about her family and wondered again whether it was a good thing that they were not there to help her or a bad thing. For Lily was not from Bangkok and knew hardly anyone there, although it was fair to say that no-one knew anything about her either, even if they thought they did. Except that she was a student, although not many knew that she was a medical student. If anyone knew the truth, then she would still have no friends, but she could not tell anyone her story, because she was too ashamed on the one hand and on a secret mission on the other.

Lily had arrived in Bangkok from a small village in Isaan near the Mekong River the year before when she was eighteen in order to study at medical college. Her father was dead now, but her parents had not been poor, as such. They were both of Chinese extraction and they had made their living from a small village shop.