The Trouble with Scarlett by Martin Turnbull

It’s 1936 – Gone with the Wind is released by first-time author Margaret Mitchell and becomes an international sensation, and suddenly the whole country is obsessed with answering just one question: Who will win the role of Scarlett O’Hara? 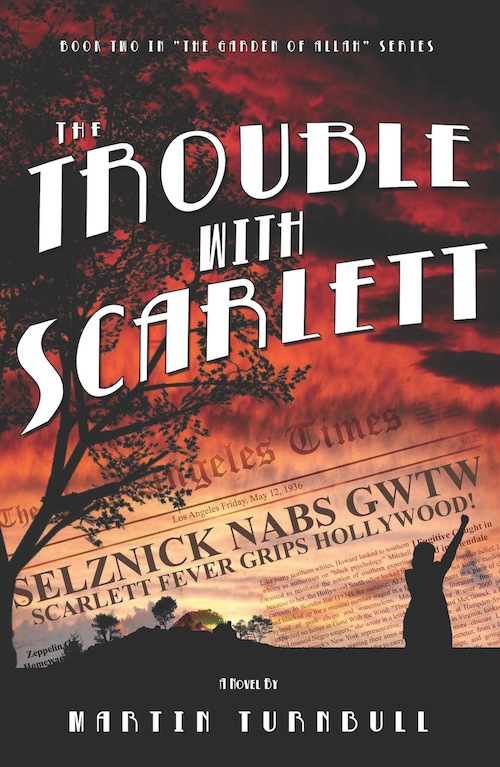 Summer, 1936: Gone with the Wind, Margaret Mitchell’s first novel, takes the world by storm. Everyone knows Civil War pictures don’t make a dime, but renegade producer David O. Selznick snaps up the movie rights and suddenly America has just one question: Who will play Scarlett O’Hara?

When Gwendolyn Brick gets her hands on the book, the clouds part and the angels sing the Hallelujah Chorus. Only a real Southern belle can play Scarlett—and didn’t her mama raise her on stories of Sherman’s march and the damned Yankees? After years of slinging cigarettes at the Cocoanut Grove, Gwendolyn finds a new calling: to play Scarlett. But she’s not the only gal in town with a deep-fried accent. She’s going to have to stand out bigger than a hoop skirt at a Twelve Oaks barbeque to win that role.

Marcus Adler is the golden boy of Cosmopolitan Pictures, the studio William Randolph Hearst started for his mistress, Marion Davies. When Marcus’ screenplay becomes Davies’ first hit, he’s invited to Hearst Castle for the weekend. The kid who was kicked out of Pennsylvania gets to rub shoulders with Myrna Loy, Winston Churchill, and Katharine Hepburn—but when the trip turns fiasco, he starts sinking fast. He needs a new story, real big and real soon. So when F. Scott Fitzgerald moves into the Garden of Allah with a $1000-a-week MGM contract but no idea how to write a screenplay, Marcus says, “Pleased to meetcha. We need to talk.”

When Selznick asks George Cukor to direct Gone with the Wind, it’s the scoop of the year for Kathryn Massey, the Hollywood Reporter’s newest columnist. But dare she publish it? Scoops are the exclusive domain of the Hearst papers’ all-powerful, all-knowing, all-bitchy Louella Parsons. Nobody in Hollywood has ever dared to outscoop Louella—until now. When Louella comes back low and dirty, Kathryn’s boss lets her dangle like a scarecrow in a summer storm. Then the telephone rings. It’s Ida Koverman, Louis B. Mayer’s personal secretary, and she has a proposition she’d like to make.


Of the 41 reviews this book has received on Amazon, all but one are four-star and five-star reviews.


It was well after eleven o’clock by the time Kathryn got the night guard to let her into the Hollywood Reporter building. The newsroom was deserted; rows of empty desks were lined up in the shadows like tombstones. Kathryn had only the faint glow of the streetlights to guide her. She felt her way to her desk and flicked on her lamp. It eyed her silent typewriter in a solitary circle.

She had until midnight. That was when the morning edition was put to bed and couldn’t be changed. Everything she wrote was supposed to go through Billy Wilkerson, the paper’s owner, but he hadn’t answered her calls to his home or his men’s club. The course of history, she decided, would have to change without his approval.

She slid a fresh sheet of paper into her typewriter.

Her fingers recoiled from the typewriter. You can’t do this, she told herself. It was idiotic to think she could get away with breaking the unbreakable rule. Louella would have her guts for garters. And the most powerful man in the world was the last person she wanted as an enemy.

She re-read what she had written. “You were a nice dream while you lasted,” she told the sheet of paper, and pulled it out of the typewriter. A crash of glass splintered the silence and Kathryn poked her head into the corridor. The light was now on at the far end of the corridor.

Wilkerson’s office door was slightly ajar, allowing a slice of light to etch the parquet floor. As she drew closer, she could hear heavy breathing coming from inside. The last thing she wanted to do was walk in on her boss making out with someone.