The Living Sin of the Multicultural Christian by Steve Garrett

As shown, the early church apostles warned of the coming corruption of the church. 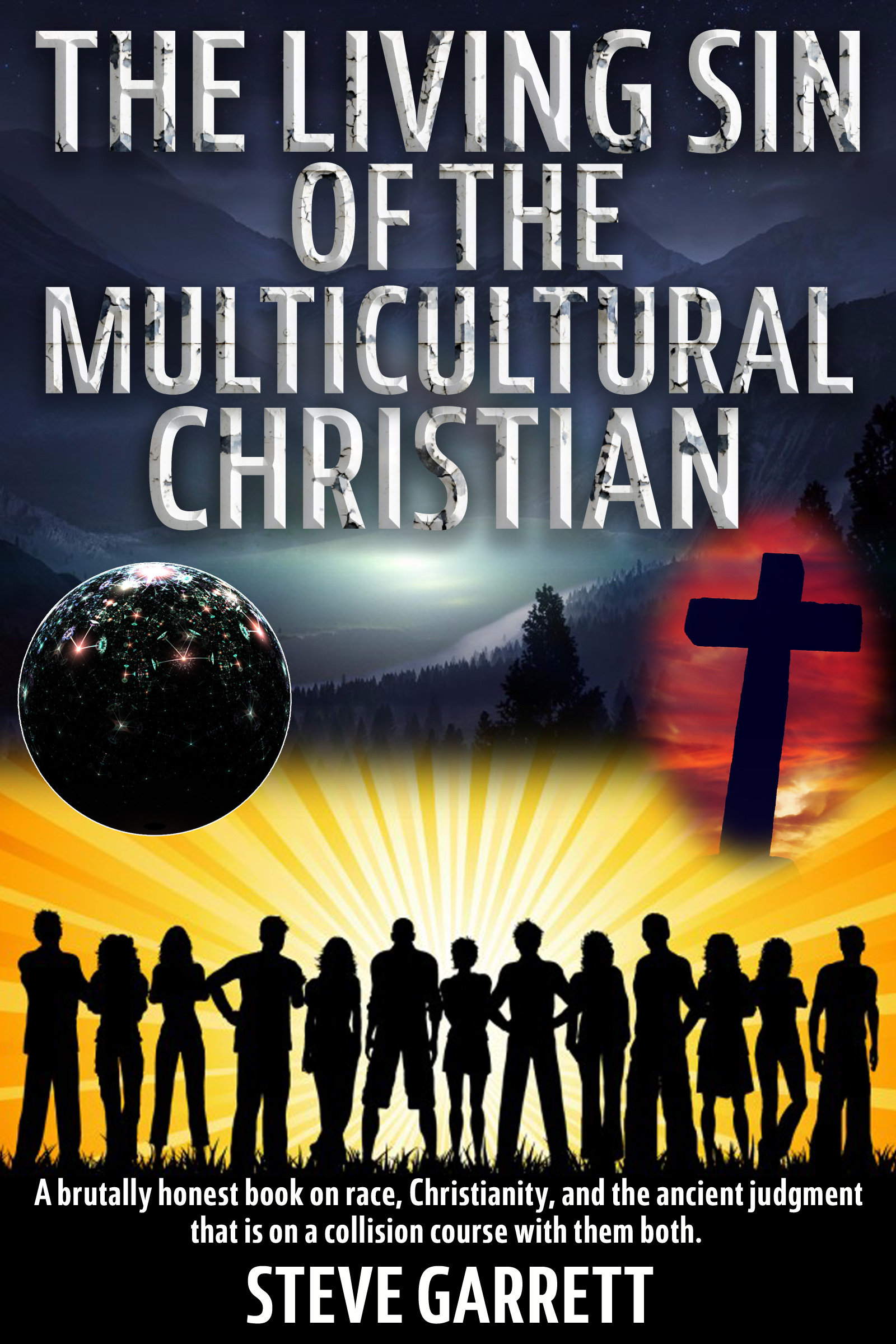 As the Church of today breeds the theology of brotherly love throughout the world, an ancient biblical judgment hidden in plain sight threatens to bring down the very pillars of modern society as we know it. A judgment so devastating that when executed by God the first time it altered the course of the world s history forever. But was this judgment a one-time event? Here lies the secret and here lies the mystery. Modern man, failing to realize the corruption of the church long ago as described by Paul and others has resulted in a self-inflicted blindness to the reality of this ancient judgment:

Acts 20: Paul warns us that the church will be infiltrated by evil men after he dies. 29 For I know this, that after my departing shall grievous wolves enter in among you, not sparing the flock 30 Also of your own selves shall men arise, speaking perverse things, to draw away disciples after them. Jude 1: Jude informs us that the infiltration has taken place. 3 Beloved, when I gave all diligence to write unto you of the common salvation, it was needful for me to write unto you, and exhort you that ye should earnestly contend for the faith which was once delivered unto the saints. 4. For there are certain men crept in unawares, who were before of old ordained to this condemnation, ungodly men, turning the grace of our God into lasciviousness, and denying the only Lord God, and our Lord Jesus Christ.

As shown, the early church apostles warned of the coming corruption of the church. Note, Paul and Jude are not singling out individual churches that were being infiltrated; they both are using a general statement that the church as a whole was infiltrated. As Christians, we must understand that we are being handed down what is left over from that corruption of the church so long ago. As Jude tell us, A faith which was once delivered to the saints now turning grace into lasciviousness. So as the modern church leads the flock into Satan s lair of the corrupted love theology of today, the end result will be the reactivation of this ancient judgment. The elite created vehicle that is the harbinger to this biblical devastation has a familiar name. Multiculturalism. Follow the author as he takes you on a journey to understand how this once great Christian nation called America was transformed into the ungodly multicultural nation it is today. Be a ringside witness as he shines a damning light on the false claims from the promoters of multiculturalism to uncover this anti-Christian aberration s true sinister intentions.


This is a newer book that is selling great.


On November 5, 2009, a Major in the United States military named Nidal Hasan decided to do his best interpretation of Allahu Akbar (Allah is the Greatest) and shoot up his fellow soldiers at Fort Hood in Texas. The body count was thirteen dead and forty wounded. For those who were watching, the media was abuzz with a whirlpool of whys, and how could he’s, with regards to this American born Virginia Tech graduate shooter. As America’s Army and the mainstream media began their frantic search for the reason why an American soldier would cause this slaughter, America had already figured it out. It wasn’t hard. If you live outside the mainstream politico and media you called it terrorism.

The reactions to the killing from the U.S. Gov’t and the American Arab communities in America were also the usual. Our protector-in-chief Barack Hussein Obama’s reaction was the typical candy coated, “We don’t know all the answers yet and I would caution against jumping to any conclusions.” Our Army’s response was no better and when the full report came out was anyone really surprised? According to a TIME article by Mark Thompson on Jan, 20, 2010, he reported: “The U.S. Military’s just released report into the Fort Hood shootings spends 86 pages detailing various slip-ups by Army officers but not once mentions Major Nidal Hasan by name or even discusses whether the killings may have had anything to do with the suspects view of his Muslim faith.” CAIR (Council on American-Islamic Relations) was quick to condemn the actions of Hasan but said this random act really had nothing to do with the peaceful religion of Islam. Another Muslim group called “Revolution Muslim” called Hasan an officer and a gentleman and sent him a get well soon wish.