The Cost of Crude by Inge-Lise Goss

When going to work becomes a deadly proposition. 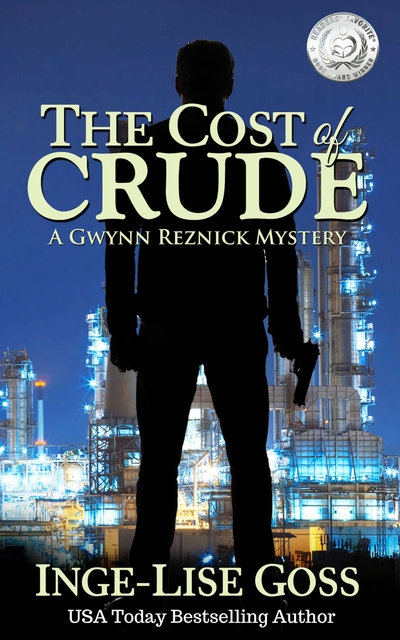 When her best friend and co-worker at Wilton Oil & Gas Company is killed in a car crash, Gwynn Reznick suspects it wasn’t an accident.  Her suspicion is confirmed when a private investigator, Ruben Dordi, shows up at her door. His team has discovered a trail of unusual deaths and disappearances among Wilton employees.

To make matters worse, Gwynn is under constant surveillance by the culprits responsible for her friend's death. But that doesn't deter her from getting involved in the investigation.

Danger lurks in every corner of the Wilton Tower. One false move could turn a risky situation into a death trap. As the investigation team digs deeper, they begin to unravel a sinister plot that threatens a catastrophic pipeline disaster. Can they solve the crime before it is too late?


The Cost of Crude ebook has been an Amazon bestseller. It has had over 70,000 downloads.


His eyes were locked on her as he yanked the tape off of her mouth. “You’re moving around too freely. Looks like I have to sit down with Todd and criticize his hostage binding technique.”

She sat silently, immobile, staring at him.

“Don’t tell me you’re going to be difficult like your friend, Julie,” he said with a stone, cold, emotionless face.

She took a few deep breaths but remained silent.

Gwynn felt her stomach churning as she continued staring at him.

Cromer picked up a chair, lowered it down next to her, and sat, looking at her intensely. He loosened his necktie, and then pulled a knife from under his sport coat. He ran the side of the blade against his fingers. He leaned forward and caressed her neck with the tip.

Gwynn forced herself not to move as he wielded the knife around her.

“You’re in for a treat; a technique that was used on me in Iraq.” He popped off her buttons with the tip of the blade. “I screamed, bled tears, and begged for death. Like you’ll be doing if you don’t answer my questions.”

She flinched and pressed her lips together.

“I suppose I should be thankful for that experience. Otherwise, I wouldn’t be the well-adjusted person I am today.” He pushed the tip into her side.

Gwynn couldn’t prevent a scream from escaping as the blood ran down her blouse.