The Chaos Formula by Richard Stooker 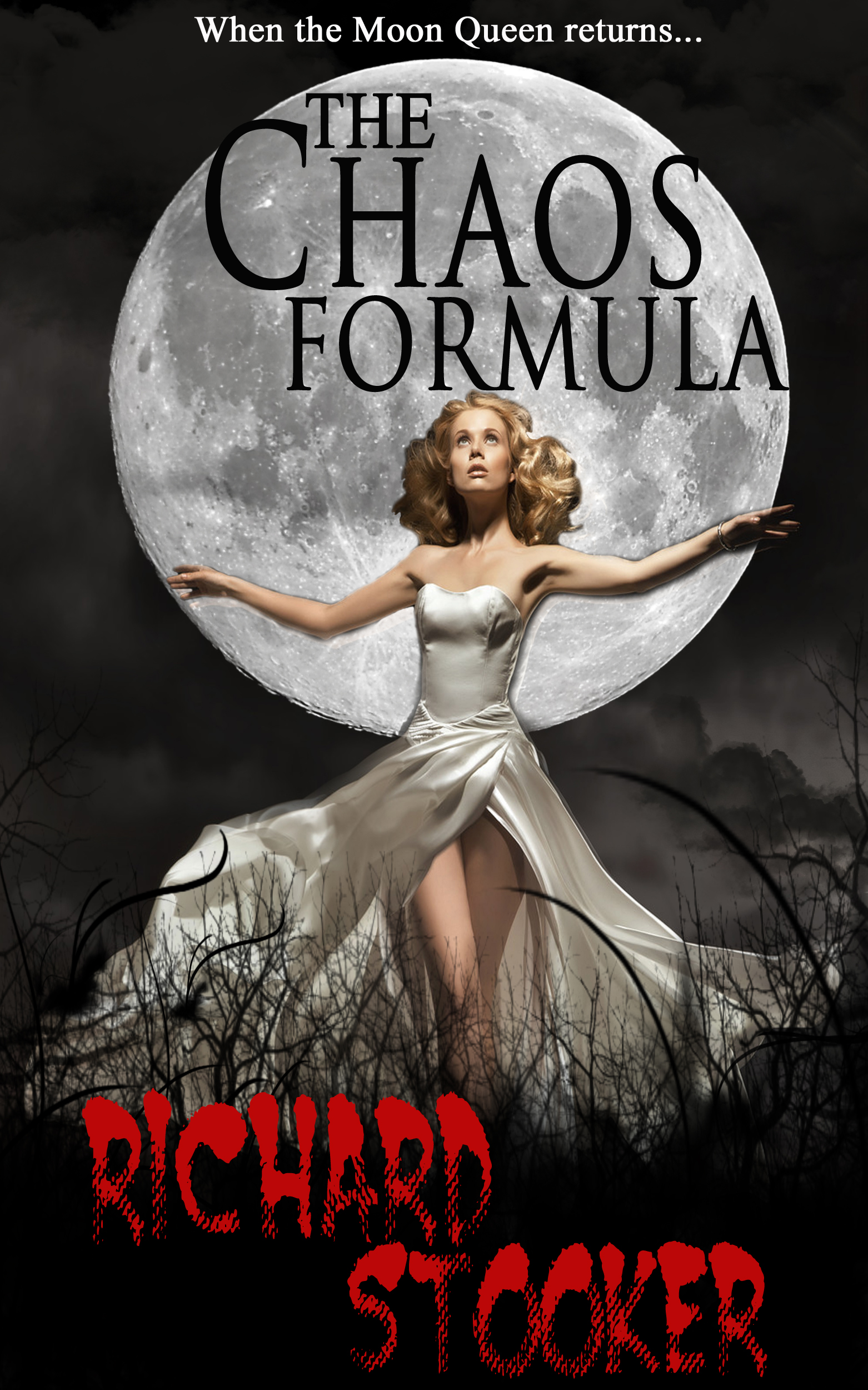 Can Jaxon Hampton love the Moon Queen enough to save Earth?

Every night Jaxon experiences vivid recurring dreams in which, 10,000 years ago, he escorts a beautiful woman through many dangers to the top of a cliff overlooking the Nile River.

How come his boss's daughter dreams the same story? And why does a strange man hypnotize Jaxon to take the young woman to a bluff overlooking the Mississippi River during the next full moon?

Jaxon works as head trader for a small money management business. His boss tells him she came up with a sure-fire trading system, the Chaos Formula. Her test account verifies a terrifyingly high number of winning trades.

Yet this ability of his boss to foretell stock market results constitutes just one sign of reality going haywire.

What compels Jaxon to spend his evenings staring up at the moon, even to the point he forces his girlfriend to leave him?

Every night, he dreams he wields a bronze sword ten thousand years in the past, at the mouth of the Nile River, long before the pyramids. He fights as a soldier for the king of a growing empire. The other soldiers call him Blood Reaper.

One night the king assigns him to take a young woman far upriver, for a sacrifice.

A strangely beautiful woman, despite her white skin, blue eyes, and gold hair.

She must travel to where bluffs overlook the Nile River, protected only by Jaxon -- against roving animals, wild people, and superstitious dirt farmers.

Jaxon does not understand why the sacrifice takes place so far from the temples, but he must obey his king. He figures a wealthy merchant wishes to sacrifice an ex-mistress to gain merit with the gods instead of just selling her to a brothel.

When she reveals her true identity as the Moon Queen herself, he does not believe . . . until he meets her ancient enemies the Shadow Giants.

How and why does his boss's daughter, Laura Ewing, dream the same story, only as the woman?

And how can he and Laura use her mother's Chaos Formula to win over five hundred dollars at a Mini-Bac table at the Lumiere Place Casino?

Why does Mr. bin Hasad, the small, dapper foreigner keep visiting Jaxon on his job even though he doesn't open up a trading account? And Jaxon can't remember what they discuss?

How did Jaxon's brother Keith buy the most evil book in the world from Ken, the Romani and Bosnian refugee who runs the largest occult bookstore in the New World, when Keith claims he stops dealing drugs?

Why does someone calling himself Zeth kill young women and drain their blood into a crystal bowl to scry messages to and from the Shadow Giants?

Blood Reaper's story comes to a conclusion on top of the cliff overlooking the Nile River.

Jaxon's story reaches its conclusion on top of a bluff overlooking the Mississippi River.

Who lives? Who dies?

Do the Shadow Giants overwhelm life on Earth with chaos and destruction?

This paranormal fantasy adventure combines stories from ten thousand years ago -- a nitty gritty historical dark fantasy -- with a contemporary dark fantasy in the modern world. A form of urban fantasy as well.


It's also available in paper through CreateSpace.


When the scent didn't go away, but became stronger, Taurek knew they followed him and the woman. Wild men, not farmers or shepherds. The scent of meat eaters differed from people who relied for their daily meals on porridge. He also smelled dead animal fur, signifying they wore pelts instead of cloth. No doubt a small hunting band. As a soldier for the king who wanted every subject tied to the land, he tracked down, fought, and killed many such wild men.

The ground sloped up, and so was drier, supporting grassland and low, stunted but leafy bushes. Taurek lost the scent of the hunters there, because the stench of hippo dung piled and sprayed over the riverbank overwhelmed everything else.

Wide, rough tracks led up from the river. Yes, the hippo herd was there, quiet, buried in mud and water, pressing tightly against each other.

He turned back to the woman. "Shhh," he said, pointing to the evil animals.

Taurek swung inland, walking quickly but quietly so he wouldn't disturb the big animals. In this heat the hippos preferred the river but, at any moment, could charge out and kill them. And as the sun set, the hippos came out to feed. He and the woman had to be away from there before then.

Taurek didn't forget the wild men hunting them, but the hippos were the greater, more immediate, threat.

When they reached the far edge of the hippo feeding grounds, Taurek turned his mind back to the wild men.

Taurek returned to the riverbank. Getting lost away from the Big River would cost them time and effort, so he planned to remain close to it.

Ahead of them, the grassland ended in a clump of trees with silver-green bark, shadowed by vines and bushes.

The flamingoes, common moorhens, and herons along the near shore took off and landed, crying out in harsh voices and shitting to show distress.