Snifter of Death by Chris Karlsen

The summer of 1889 was proving to be a strange one for Detective Inspector Rudyard Bloodstone and his partner. 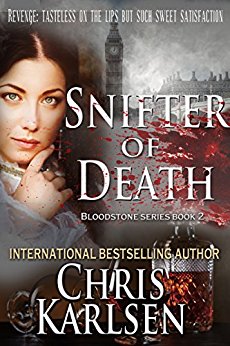 The summer of 1889 was proving to be a strange one for Detective Inspector Rudyard Bloodstone and his partner.

They had a sexual pervert loose. The man didn’t actually harm women but threatened them at knife point, fondling them, and ultimately stealing their stockings.

Far more serious were the murders of influential men, which appeared random other than they were all killed by arsenic poison. Never had he and his partner had cases with so little workable evidence.

Also, the rivalry between him and his detective nemesis at London’s other police department was intensifying. That
nemesis was the boxing champion of their department and looking to challenge Rudyard, who never trained as a
boxer.

Besides Rudyard’s pride being at stake, and the pride of his station, his nemesis also had in his possession a scandalous photograph of the woman Rudyard cares very much for. The new lady in Rudyard’s life had captured his heart and he’d fight the devil himself to save her reputation.


Graciela had just opened the door to the station when she was slammed against the doorframe. A struggling mass of constable and resisting arrestee crushed the breath out of her. Another constable rushed to the aid of the first. The officers bumped and jostled her more as they stumbled into the lobby finally bringing the reluctant arrestee under control.

Graciela caught her breath, straightened her clothes, and not for the first time wondered whether she really wanted to go through with her plan. Uncertain if she’d find the courage to proceed down the road if she hesitated now, she took a deep breath and pushed her way into the station.

She tugged the wide brim of her hat down as much as possible and stepped up to the lobby’s desk. “Sergeant, I’m here to bail out a prisoner. His name is Newt Addy.” She handed over the five pounds bail money, almost all her savings for the past six months. “Will he be released immediately?”

The sergeant nodded, put the money in an envelope made a notation on it, and then placed it in a drawer. “He will.” The sergeant looked her up and down with a curious expression. “Is he your husband? You don’t seem the type to associate with his sort, if you don’t mind my saying.”