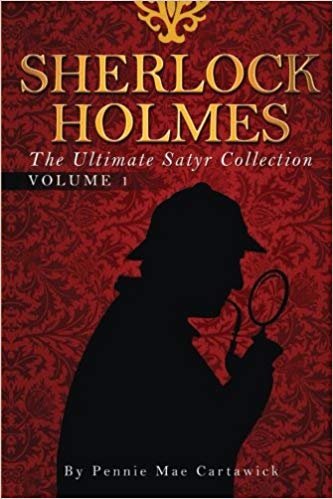 STORY ONE: The Game of Cat and Mouse.
The interior was dark and neither of us searched for a lamp or switch. There came a ticking of some clock or another. And the sound of a dripping faucet somewhere in the house was like a hammer to an anvil. Our breaths were loud, but my heart sounded louder to me. Interestingly enough, Holmes moved as though he'd been through here before.

STORY TWO: The Mystery of the Faceless Bride.
The bride carried no decaying roses but her bridal dress was torn and burnt. Her bare legs, starved needle points, staggered disjointedly. The veil hung low over her face. I had my pistol, however I could not shoot. Her face! Even in the darkness I could see its ruin.

STORY THREE: The Case of the Cracked Mirror.
The fireman had seen a skeleton, wearing a dress coat, whose head was aflame. I was deeply worried for the missing young woman. If she had been taken by the opera ghost, be he flesh or spirit, how would she fare if she rejected his 'love'?

STORY FOUR: A Strange Affair with the Woman on the Tracks.
Jane screeched at this further betrayal and went for Henry. They began to struggle. Henry was the stronger out of the two yet the woman's pain was unstoppable. His hands wrapped around her throat and Jane clawed at his face until she fell. We stared down at Jane's body.

STORY FIVE: The curse of a Native.
Adams had violently slapped Kimilu so hard that the sheer force had floored the waiter and the usually humble waiter had lost it. He had stood up and angrily talked back at him in his native language which Adams did not understand. But Butler had lived in Africa for over two decades and he understood every word. It was chilling to say the least.

STORY SIX: The Mystery of the Poisoned Tomb.
"Ah good morning, John, if we do not hurry then we shall miss the unveiling of the sarcophagus." He leaped up, feeling much better than I did, and chased me into my own room so that I could get changed. Holmes and I made our way through. They had been waiting for us. I couldn't wait to see if there really was a Pharaoh in the next room.

STORY SEVEN: The Case of the missing Mayan Codices.
"I do not suppose that you have brought your revolver with you Watson?" I shook my head to indicate that my response was in the negative to his question. He turned his head forward again and led us through the kitchen, past several side pantries. As we cautiously inched forward, Holmes observed that the blood trail consisted of droplets of varying size.

STORY EIGHT: Murders on the Voyage to India.
Murder; "Murder." The scream echoed down the hallway shaking me from my slumber and into the dim vision of the electric lights. Someone was banging on the door and Watson scrambled to open it. Her hands were covered with odious red, and tears streaked across her reddened face.

STORY NINE: The Heist.
"Gentlemen, I am here to represent the interest of Henry Bank & Trust. We would like to resolve the situation quickly and quietly. Holmes sat across from her, studying her with a nonplussed air. "I must admit" he said, "that I do not know how to assist you. Inspector Lestrade was here earlier, and it appears that you are missing nothing and they have no thieves in custody.

STORY TEN: Death in the Tropics of an English Explorer.
"And I suppose you expect me to solve the whole case on that information alone? Surely there is something more you can give me." Replied Holmes; quickly losing interest in the subject. Mycroft continued, "Suppose I said that it is possible, while studying the lives of an indigenous tribe known as the Koburu, that the great explorer, Sir Hughes Blakefield, was murdered in cold blood.


STORY EIGHT: Murders on the Voyage to India.
Murder; "Murder." The scream echoed down the hallway shaking me from my slumber and into the dim vision of the electric lights. Someone was banging on the door and Watson scrambled to open it. Her hands were covered with odious red, and tears streaked across her reddened face.