American college student Kate Spenser travels to Europe for the first time in 1986, facing peril and passion before meeting (and missing) her Punk Charming. 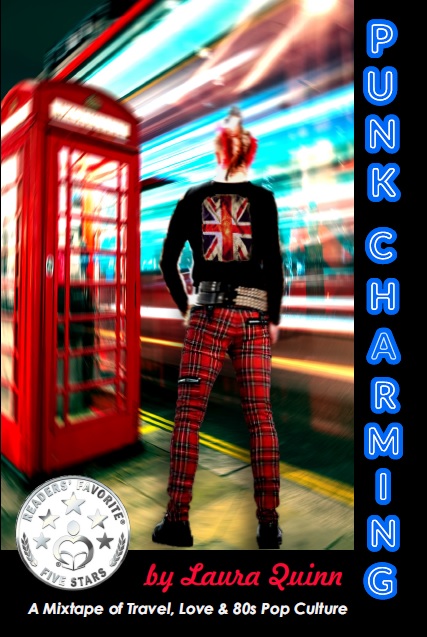 1986 – A world of adventures awaits Kate Spenser as she flies from Chicago to study at Oxford University. With two weeks before summer classes begin, the new waver is psyched about exploring Europe. Little does she know the adventures won’t be quite what she imagined. After a narrow escape in Paris, Kate flees to Spain for a respite with her pen pal. On her way to Oxford, she must travel through the dreaded Gare d’Austerlitz station in Paris and is keen to leave as soon as possible.

Fleeing a fracas at the Eiffel Tower, James Barrington jumps aboard the Calais-bound train just as it leaves. Love comes quickly as the charming British punk escorts Kate across the Channel to England and through the streets of London. Their paths separate as she begins classes in Oxford, but both try to reunite in the pre-Internet era.

Fate and a traitorous mate keep the soul mates split apart, but cherished memories linger. As chance, circumstance, friends and foe each continue to play a role, can true love travel through time?

Keywords: 80s pop culture, oxford university, spain, england, france, the one that got away, love story


Punk Charming has received critical acclaim, including being awarded the Readers' Favorite 5-Star seal and being selected as a semi-finalist in the Screencraft Cinematic Book Competition this year. It has received positive reviews and I have heard from male and female readers, ranging in age from 13 to 91, who enjoyed the book. As author of Punk Charming, I've been invited to speak at Comic Con, Pop Culture Con, libraries and book stores.

Unfortunately, I have no sales records as my former publisher did not release them. I do know that within the first month of its initial release, Punk Charming was ranked the #1 fiction book on Lulu.com. I was recently made aware that my publisher closed its doors and all rights were returned to me, so it has just been rereleased as a self-published book.


“Interpol will be on alert the moment they spot you in that outfit, if O’Hare’s airport security doesn’t catch you first,” Richard Spenser cautioned his daughter in a hushed voice as they left the check-in counter. The large lenses of his grey-rimmed bifocals magnified his gleaming brown eyes and betrayed his austere warning. Despite his multi-dialed Omega watch, Mister Spenser looked very unlike a spy, wearing tan Sansabelt pants with a blue button-down shirt and brown Florsheim loafers. Much to Kate’s chagrin, he wore his clear plastic pocket protector with matching chrome pen and pencil set, pack of Wrigley spearmint gum and lab ID tucked behind.

“They’re on to the covert college student cover? Drat! Well, the mission may not yet be compromised as long as they don’t discover the microfilm stashed in Mister Charles Bear’s stuffing…surely, he’s cuddly enough to be above suspicion!” Kate Spenser responded confidently. The years of watching Sunday afternoon espionage movies with her father had left their mark, she realized. To herself she thought, I just hope Mom is out of earshot—I don’t need another lecture about my clothes. The eighteen-year-old adventurer was dressed to chill for her trans-Atlantic flight, wearing her Duran Duran Sing Blue Silver T-shirt, Palmetto grey sweat pants and Reebok high-tops that were once white. Even her hair was relaxed. Rather than spiking it, she simply highlighted the long bits of bang with pink mascara and pulled back the rest of her straight auburn hair with a periwinkle lace headband. Her face wore only a splash of pink blush on her high cheekbones, though her eyes displayed their usual ombrė of pastel eye shadow underlined by exaggerated crescents of cobalt blue eyeliner.

Collection/Series:
I plan to turn this book into an international cozy mystery series, featuring the main characters James and Kate.