Price of Justice by Alan Brenham

Price of Justice is a suspenseful tale of grief, revenge, and second chances. 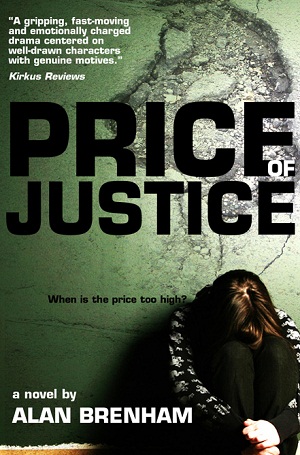 His focus is on solving the murders—until the unthinkable happens…

Recently widowed, Austin Police Detective Jason Scarsdale works to solve the murders of two pedophiles, while trying to be both mother and father to his five-year-old daughter. During his investigation, Scarsdale is forced to navigate between the crosshairs of two police commanders out to get him. Drawn to Austin Police Crime Analyst, Dani Mueller, a native German, who has also suffered tragedy, Scarsdale fights both his attraction and his suspicions that something just isn’t right…

She is hiding a secret, one that could not only cost her a job—it could end her life…

Dani hides a deadly past. After her daughter was brutally murdered, Dani exacted her revenge then changed her name and fled to Austin. But if her secret ever gets out, she knows there is no place she can hide from the murderer’s vicious family.

Pulled into a web of malice and deceit, Scarsdale and Dani discover the value of breaking the rules. Then just when they thought things couldn’t get worse…they do.

"For those who love police/crime novels this is one of the best..."
Grady Harp, Amazon Hall of Fame Reviewer

"From the shocking opening scene to the startling conclusion, Price of Justice provides the suspense and psychological depth one expects to find in a first rate thriller."
Christopher Ackerman, IP Book Reviewers


On Tuesday, I found myself seated in the third row of the Travis County courtroom. Scott Dewayne Lasiter was the lowlife on trial for the murder of a young girl. That pervert sat at the defense table to my left directly in my line of sight.

Lasiter wiped the back of his hand across his brow and glanced at the victim’s mother, Susan Crowell. He looked in my direction and shifted in his seat. Nervous, Lasiter? You sick monster. I dug my fingernails into my purse every time I looked at him. I wished they were digging into his eyes instead.

Today Susan’s worst nightmare would become a horrible reality, and I knew exactly how she felt when she walked past me on her way to the witness stand. The jurors’ eyes scrutinized her every step as she neared the witness chair just like the jurors in Burton’s trial did to me. That chair sat behind a white pine modesty panel, next to the judge’s elevated bench. Susan would be center stage like I had been two and a half years ago.

She seemed to be trying hard to maintain her composure, but I could tell by the way she shifted in the witness chair, the way her hand alternately covered her mouth and toyed with the gold cross dangling around her neck, that she was anything but composed. Testifying is a nerve-wracking experience. No, actually, it’s a terrible experience—it had been for me and it would be for Susan too.