More Than Lust by Ann Josephson, writing as Ann Jacobs

One weekend, irresistible attraction, yet it's more than lust 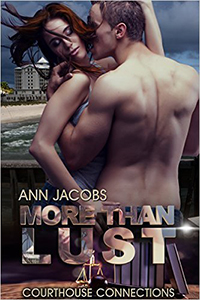 A chance sighting, immediate chemistry, but only a few days for lovers to find out if they’ve discovered MORE THAN LUST . . .

Andi Young and Gray Syzmanski have a lot in common. Both are attorneys, even though Gray uses his legal training as a DEA operative. Both grew up in Tampa, and both are champions of justice. The immediate attraction between them is too strong to be denied.

Beyond that, they’re as different as night and day. She’s from a happy but modest home, while he hails from old Florida aristocracy but has a controlling, widowed mother determined to run—and ruin—his life.

Andi doubts their weekend fling can grow into a relationship that’s real, while Gray is determined to explore a real relationship—as soon as he returns from an undercover assignment outside the country.

Join them for this carefree, lusty but emotionally charged contemporary romance, about two young lovers who will capture your hearts.

Sales continue to be in the midlist range; exacct numbers available on request. This is book one of my popular Courthouse Connections series, a prequel to Bittersweet Homecoming, whose sales over 13 years since original release have exceeded 10,000, in print and electronic editions.


Gray had seen people who’d been afraid with far better reason, but he’d never before felt so protective, so determined to take care of another human and chase her demons away. He cradled Andi against his body, using his hands to move up and down her back because the motion seemed to calm her. “It will be all right, I promise.”

She burrowed her face against his shoulder when another roll of thunder rattled the windows and set her to shivering yet again. “Would it help if I drew the drapes?” he asked.

When she raised her head and met his gaze, he couldn’t resist lowering his lips to hers, intending the contact to be only a gentle, reassuring kiss. She was having none of that, though. She wound her arms around his neck, holding him captive, opening her lips to him. When he tried to keep his original goal in mind, she looked up at him, tears glistening in her eyes.

“Please, Gray. Make love with me. I don’t want to think. Not about the storm or the trial or anything else. I just want to feel. To find out if the we’re really as good together as I’ve been imagining ever since I first saw you from across that room.”

How could he say no? How could he be sensible when every cell in his body told him to do as she asked, devour the woman he was beginning to think meant far more to him than a weekend hookup? He couldn’t, not with her looking at him as though he’d hung the moon, practically begging him to drive away the demons that the storm outside had brought to life.