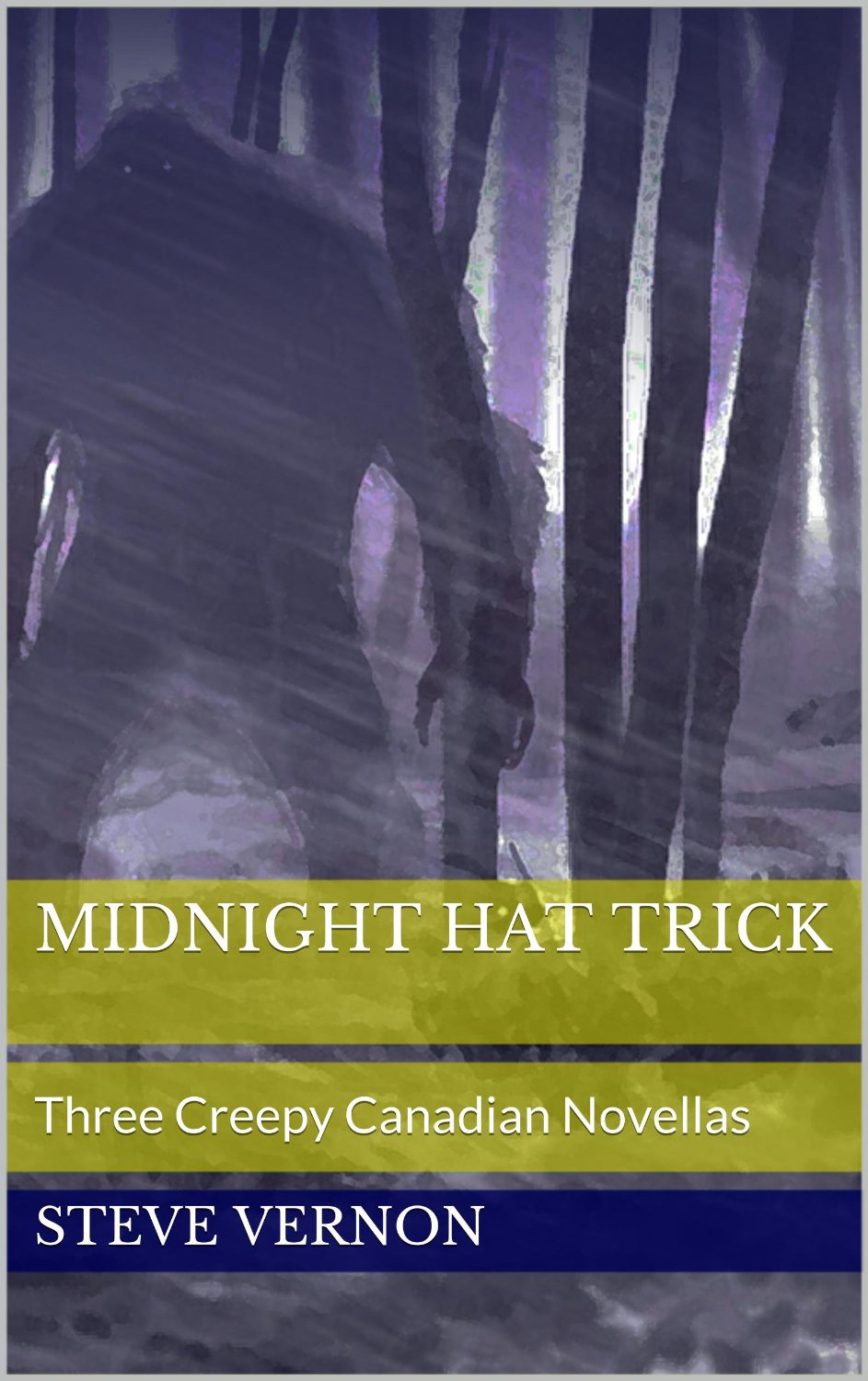 There is magic in the number three.

Just think about it.

HAMMURABI ROAD is a dark tale of redneck noir, revenge and retribution, backwoods justice and getting closer to a black bear than you ever dreamed possible. The story starts with the eternal triangle – three men in a pick-up truck – two in front and one duct-taped in back.

NOT JUST ANY OLD GHOST STORY is a quiet little story about coming home and ghosts that you can never escape. It is a story that will take you to the very heart of storytelling itself.

SUDDEN DEATH OVERTIME is a fast and fun read that asks the question – what would a bunch of over-the-hill old-time hockey players from Northern Labrador deal with a tour bus full of vampires? If you are having a hard time dealing with that concept – just throw the movie SLAPSHOT into a blender with the movie 30 DAYS OF NIGHT and hit frappe.

This is not high literature, you understand.

This is a cold beer with a cheeseburger chaser.

“Steve Vernon gets it right. SUDDEN DEATH OVERTIME hits all the right notes with me. A wonderful cast of characters, great dialogue and an evil bus full of vicious vampires.” – FAMOUS MONSTERS OF FILMLAND

“This genre needs new blood and Steve Vernon is quite a transfusion.” – Edward Lee, author of GOON and THE BIGHEAD


"If Harlan Ellison, Richard Matheson and Robert Bloch had a three-way sex romp in a hot tub, and then a team of scientists came in and filtered out the water and mixed the leftover DNA into a test tube, the resulting genetic experiment would most likely grow up into Steve Vernon." - Bookgasm

No one noticed quite exactly when the long black bus stole into the parking lot of the Anchor Pub. As far as anyone knew the bus just sort of drifted into the Labrador coastal village of Hope’s End like an unexpected snow flurry.

Things happen that way in the town of Hope’s End.

Slow and unexpected and all at once.

Judith Two Bear leaned her elbows against the wood grain of the unvarnished table top. Her cigarette glowed like a lighthouse’s lonely beacon, bobbing as she nodded three slow beats behind the music of the static-ridden radio. She had parked herself at the window seat since dinner time. She liked to watch the world go by from the sanctuary of the town’s only drinking hole – the Hope’s End Drink and Drop Tavern and Grill.

Several long slow warm beers later Judith Two Bear found herself staring vaguely at the names and dates carved and inked into the table top. She knew some of them. She could guess at some of the others and she wondered just who the hell the rest really were. How many lonely souls had made their mark on this table and had then just sat here like so many half-finished glasses of warm draft beer – just waiting to be swallowed but not quite yet.

Truthfully, she didn’t think of any of this.

Not in those exact words, anyway.

People don’t really think that way – only in books and poetry and movies and other such bullshit. Rather, Judith Two Bear felt it, perhaps. She breathed it in with the stale pub air. Her grew her own sort of loneliness, nursing her drink and her evolving disappointment and her unvarying boredom that were as much a part of her as was the blood that sludged through her tired veins.