Memoirs of a Gigolo Happy Halloween Oliver by Livia Ellis

Oliver is back for Halloween. He is invited to one of THOSE parties in Paris where we see him and his life as an escort from an entirely new perspective. 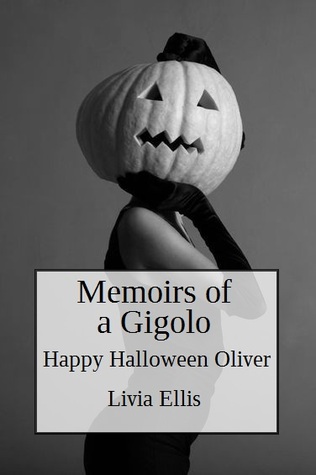 Oliver Adair. Beautiful on the outside. Damaged on the inside. One bad decision followed by the next leaves him broke and out of options. When propositioned to sell his body he enters into a parallel world of sex for hire. Oliver embarks on a journey that will force him to confront his demons, answer for the sins of the past, and become a man.
Oliver is back for Halloween. He is invited to one of THOSE parties in Paris where we see him and his life as an escort from an entirely new perspective.


What do I really want to do right now? I want to go to bed and sleep for about ten hours. I'm tired. I'm jetlagged. My ass hurts. I have a bruise on my knee. I have cramps. But I have to go to a party. Because that's what I do. I don't get the option of calling in sick. So what do I do? I do what I'm paid extremely well to do. I pull myself together. I make myself pretty. I do my job.

Instead of flying to London, Oliver and I were instructed to make a detour to Paris. Oliver was actually instructed to go to Paris. I could have gone home to London. People want to meet Oliver. They will all be in attendance at the annual Halloween party of The Vicomte. I used to think The Vicomte was what royal people were like. Sort of full of sin and dissipation. Now I know that royal people are more like Oliver. They have to be. He's so classy and has such good manners. He's really polite. He doesn't even complain when I make him take me shopping. He just sits in that chair the boutiques always have for the men reading magazines and drinking tea and telling me that whatever I wear only pales in comparison to my beauty. How sweet is that?

I told him I would be with him from start to finish. We went to Japan together. We go home together. The end of our trip has just been prolonged. So we go to Paris. I hate when this happens. I like sticking to the plan. I love Paris. But I was planning on taking a few days off after Japan just to recover. None the less, here I am in Paris. What is in Paris?