Memoirs of a Gigolo Happy Christmas Oliver by Livia Ellis

It's Christmas in Russia for Olga, Oliver, and Elon. Oliver meets the family, a couple of Russian gangsters, an amorous cougar and receives a dubious welcome to Saint Petersburg in this stand alone story. 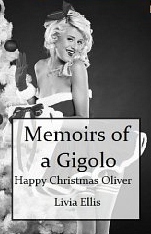 Oliver Adair. Beautiful on the outside. Damaged on the inside. One bad decision followed by the next leaves him broke and out of options. When propositioned to sell his body he enters into a parallel world of sex for hire. Oliver embarks on a journey that will force him to confront his demons, answer for the sins of the past, and become a man.
It's Christmas in Russia for Olga, Oliver, and Elon. Oliver meets the family, a couple of Russian gangsters, an amorous cougar and receives a dubious welcome to Saint Petersburg in this stand alone story.


My sales are consistently good and my books are often at the top of the rankings on Amazon.


I stand outside of the house next to a taxi driver watching in no small amount of wonder as Olga tries to convince Oliver that she really cannot go to Russia for ten days then on to Switzerland where they had a booking over New Years without the six suitcases she insisted were absolutely necessary.

The two of them stand over the pile of luggage and argue in a never ending circuit that would only end either when a trained hostage negotiator arrived, or I took steps.

There really and truly was nothing she could live without in the six suitcases.

Things he’s not going to need. Why didn’t he just let her pack for them the way she wanted to? Why does he always have to be so difficult? How can he expect her to coordinate them properly without making them look matchy-matchy if she can’t pick out his clothing?

It is at this point the taxi driver offers me a cigarette which I take. He asks me one question. Are they always like this?

Does the bloke realize eventually the pretty lady is going to get what she wants?

Probably. He just enjoys living under the illusion he has some control left in his life.

There had to be something she could give up.  He watched her pack. He knows perfectly well she has a suitcase with just boots. Not shoes and boots. Just boots.

Boots are very important. Boots matter. Has he never been to Switzerland before? How could he expect her to go to Switzerland without at least ten pairs of boots? As it was, she was sacrificing.

They were going to be in Switzerland for ten days. Does she truly need a different pair of boots each day?