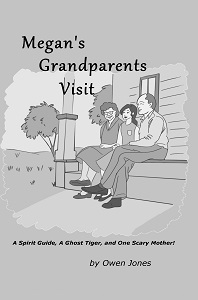 Megan’s grandparents ring up one night out of the blue to ask if they can come down for the week end.

Megan and her parents are concerned that one of them may be sick, but that is not the case, they just have more time on their hands now that they are retired and want to get to know Megan better.

The weekend holds many surprises, but the best one for Megan is hat her grandparents are sympathetic towards her beliefs and can even feel Grrr’s presence.

‘Megan’s Grandparents Visit’ is the ninth novella in ‘The Megan Series’, which has the general theme of the psychic development of Megan, a teenage girl, whose father has become sympathetic to, but whose mother is still against her belief in ghosts, familiars and Spirit Guides.

When Megan went down for breakfast, her mother put a cup of tea and a plate of bacon, eggs and sausages in front of her.

“We have a surprise for you, Megan. Your grandparents phoned last night and said they’d like to come down for the weekend. They will arrive tomorrow afternoon.”

“That’s great, Mam, I haven’t seen Dad’s parents for ages. How long is it? Two years?”

“It could be. It will be nice to see them again, won’t it, Robert?”

Robert got on well with his parents, but they lived quite a way off in St. David's, West Wales, so he had gotten used to not seeing them often. He had grown up on his parents’ farm, but had left the village to go to university. He didn’t like big cities, but he knew that he could never go back to the isolation of a remote farm again either.

With no other successors, they had sold their farm when they had reached sixty-five and could not be bothered to run it any longer.

They were not angry with him about it, although they were disappointed and he felt guilty for not following in their footsteps, but there it was. He had always justified his decision by telling himself that he had his own life to lead as they had led theirs.

They had done what their parents had done, which was to farm. They considered that that was normal for people like them, but they could also see that the world had changed since they were young and so had never tried to stand in their son’s way.