In The End: a pre-apocalypse novel by Edward M Wolfe

A group of college students goes on vacation to enjoy some fun in the snow but instead encounters the end of the world as they know it. 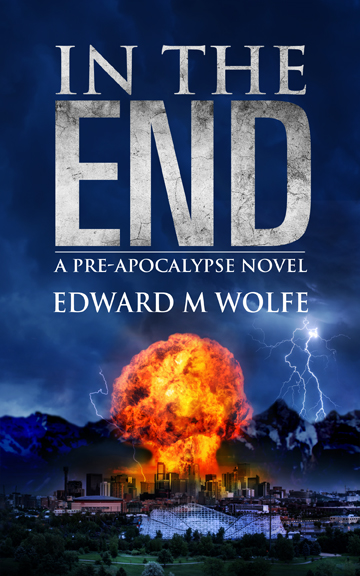 Four college students head to the Colorado mountains for two weeks of rest, relaxation and winter fun on the bunny slopes. What they get instead is the end of the world as they know it as the city of Denver is destroyed by a nuclear explosion shortly after their arrival.

With no electricity, no cell phones or communication, they are isolated on the mountain top and have no way of knowing what is happening elsewhere in the country.

Was it a nuclear accident or a deliberate attack. Was it limited to Denver, or is this the start of World War Three?

In the absence of law enforcement and the threat of punishment from the criminal justice system, those with anti-social, criminal urges are free to do as they please. The former guarantees of life, liberty and the pursuit of happiness are gone. Now it’s up to every man and woman to provide and secure these things for themselves...


The book has sold steadily for a year and usually hovers around #100,00 in rank, going up and down from there. It is also availble as an audiobook which is also enjoying daily sales, but is too soon to have a rank.


The driver looked at Carl standing in the rain getting drenched. “We need to get our umbrellas from the backseat. Can you give us a second?”

“No, you need to get the fuck out of the car before I shoot you in the face. How’s that sound?”

They saw the man behind the portal shaking his head and gesturing to someone behind him. The driver opened her door and Carl grabbed her as she stepped out. He pulled her in front of him, holding her there by her upper arm. “You!” he said to the other woman. “Get in front of her and start walking up to that red car, slowly.”

The other woman did as she was told. Carl and his hostage followed directly behind her. Within seconds the women were soaked and chilled from the relentless wind. When they reached the car, he yelled to the man with the rifle, “We just need a few guns. Send someone out with some and you can have your women back!” He was going to say he wanted something better than a .22 but he didn’t want to advertise the caliber of the gun he was holding.

Behind the wall, the men huddled together. The man at the portal stayed where he was and told the others what he was observing. A brief discussion took place about how to handle the situation. Most of the men were willing to make the trade that Carl demanded. One man was opposed to trading and had a better idea.

“He’s got my wife out there. If we just give him what he wants, what’s to keep him from coming back again when he want something else?” he asked the group.

“We weren’t prepared for this, Noah. After we get rid of these two, we’ll build a barricade at the intersection and we’ll post guards.”