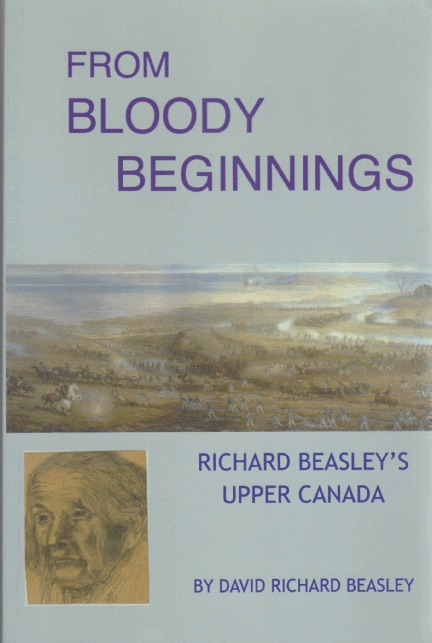 Richard Beasley narrates from when he is five years old in 1766 as witness to the tenant rebellions in New York State followed by the American Revolution when his father Henry Beasley and Uncle Richard Cartwright in Albany, New York, risk their lives through the horrors of the civil war for the loyalist forces. Richard Beasley becomes a commissary at Fort Niagara, from which he observes the war out of Niagara featuring his cousin Richard Cartwright Jr,, secretary to Major John Butler of Butler's Rangers, Chief Joseph Brant and Ensign Walter Butler while he continues his fur-trading at Toronto and the Head-of-the- Lake Ontario. After the war, his land dealings, merchant business and association in trade with Richard Cartwright Jr and Robert Hamilton, his arguments on the settlers' behalf in the legislature where he was speaker of the Assembly, and his involvement as agent in the German land companies in Markham and Waterloo Counties, particularly during the Aaron Burr conspiracy with the French to retake Canada, make him suspect to the oligarchy in York, later Toronto. As magistrate and organizer of the militia in West York he takes on several roles during the War of 1812. The battles in the Niagara Peninsula, which involve the 2nd York Regiment of which he is Colonel, he describes in detail.

As his intellectual cousin Richard Cartwright becomes more conservative and prominent, Richard Beasley grows more liberal. His correspondence with the famous defender of civil liberties Lord Erskine, his work for a free press, his championing of the reforms of Robert Gourlay and his friendship as a moderate reformer with William Lyon Mackenzie continue the political themes introduced earlier in the book. He manages to overturn the judgment of a military tribunal set up to ruin him by his powerful enemies, including Reverend Strachan and Col. William Claus, for his political views. He relates the economic blights, the pastimes, the joys and sorrows of the settlers with particular emphasis on affairs at the Headof-the-Lake, which, with his help, becomes Hamilton, a county capital. He gives us interesting details of the Upper Canada Rebellion and shows that many among the Upper Canadian community sympathized with it. In his last stint in the Assembly he does much for the establishment of civil rights and works with his one-time conservative opponent John Beverley Robinson for the country's benefit before the uniting of the provinces in the Act of Union of 1841.


Out of print, several reprintings. Chosen for a BRAGG medallion.


Upper Canada was wilderness when I was born in Albany, New York in 1761. As I write, it is the fall of 1841, and railways are being planned. Looking back I see a continuous and accelerating transformation.

Mother took my older brother Robert and me down the Hudson River from Albany to Nobletown to visit her uncle, Robert Noble, whom I remember as a force —a tall, strong-armed man with long gray hair and a broad grin. Tenseness and fear impressed an incident in my mind. I was five years old.

Robert Noble hushed the men and stood up from the table to listen. A man’s shout cut to my heart. “They’re coming!”

Thirty men stood up and filed out the door while Noble took his wife, my mother Maria and her two children to the back of his house.

“There’s a bit of danger comin’,” he said worriedly. “Stay out of sight and don’t get alarmed now. We’ll be all right.” He turned to go, then stopped and smiled at my brother Robert and me. “Look after the ladies,” he said.