Fangs of Fury by Paul Zunckel

Not made by the hand of God 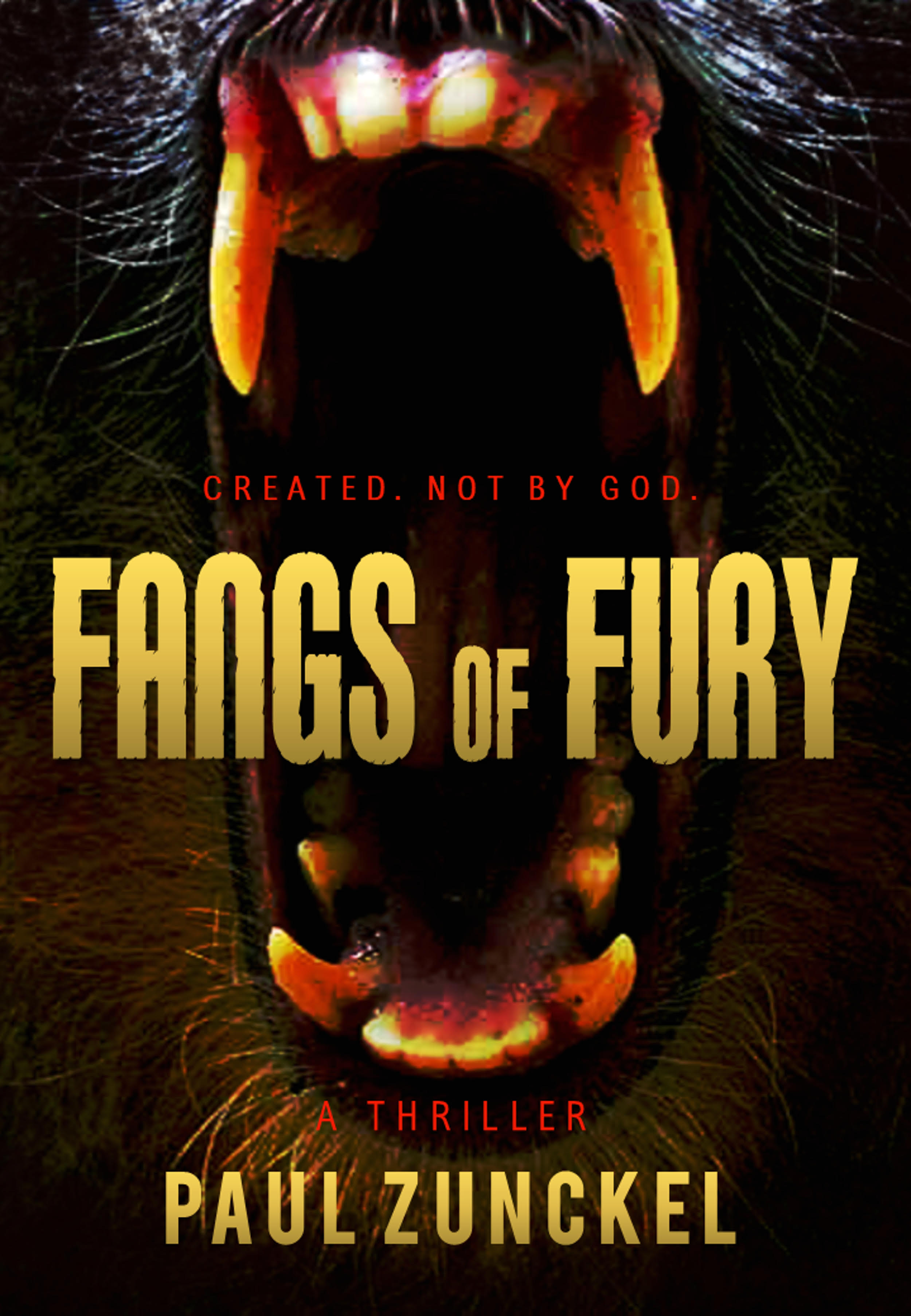 Synopsys for Fangs of Fury

He tries to scream, the terror stuck in his throat…the darkness all around him…the stench, he can smell the creature from hell, the low growl from its throat…flailing around him with his fists…can’t see, the darkness wrapped around him like a blanket…must defend myself, oh my God the fangs.

Africa, a land of myth, witchcraft, magic and corruption. A land where death waits in the shadows. A land where the hybrid now walks unafraid with a blood lust and a hatred for man …created to kill.

Man playing at being God, working with genetic creation, determined to create the perfect Human being…in isolation nothing can disturb the creation…nothing can go wrong but if you are in Darkest Africa, no one can hear you scream as you die by the hand of a creature not created by God, but by the sick mind of man…a creature from hell.

Two creatures now walk the African bush…one, a gentle soul breed from the womb of a chimpanzee…the other…a killer, a cross gorilla/mandrill baboon.

The hunt is on to bring an end to the madness, to the fear that stalks through the undergrowth, that is spreading its wings over Africa, to put an end to the killers rampage, to capture the gentle Hybrid…to sell her body to the highest bidder.

One man driven by greed…the other by compassion.


This is a new book just been released in South Africain print version as well as on Amazon and Smashwords..

Sales in S.A.have been slow as well as in the e-book as I have not been very active due to service provider issues but that has now been corrected and I am at present looking at picking up the marketing. My previous book such as Blood Moon over Africa, Blood Spoor in the Dark and Blood Demon-Revenge were published by VHP and translated into Afrikaans by Liesel Dryer.

I am starting allover again from scratch as an Indie Author.

The thunder rolls across the darkened sky, lightning flashes earthwards splitting a tree in half, smoke rising from the ruined remains and the rain hammers down on the parched soil of Africa. The creature sits on its haunches as it takes refuge in a shallow gully as night covers the valley like a blanket, the rain hitting its body like a volley of pin pricks, but it pays no heed to the sting from the rain as it tests the air for the scent.

The scent of the She is strong … it hangs in the air pulling the creature like a magnet and then another scent assaults its nostrils … a scent that brings a guttural growl from deep within its massive chest, exposing its killing fangs in a snarl, its hairs rise on its back and rage surges through its body. Its muscles tense and it makes ready to attack … to kill … to rent and rip … the unmistakable scent of the one they called Father … the one that was different from them, the one that had to be obeyed, the one that was a creature called human.

Standing erect, it moves along the length of the gully, the wind whipping the rain down in a torrent, the branches from the trees slapping at its hideous form, but it pays Mother Nature no heed. The scent has whipped all thought of the She from its mind … all it will do is attack and kill, to rid the stench of human that taunts it on the wind.

It moves with stealth and cunning for it has the mind of a killer. The gully ends in thick shrub and its evil yellow eyes take in the scene below it. A cluster of mud huts, the scent of the hated human stronger now, but no visual source of the smell that offends it. It sits back on its haunches, puzzled and slowly a memory surfaces …