A crazy woman with very thick plot armour, takes on an incompetent dictatorship 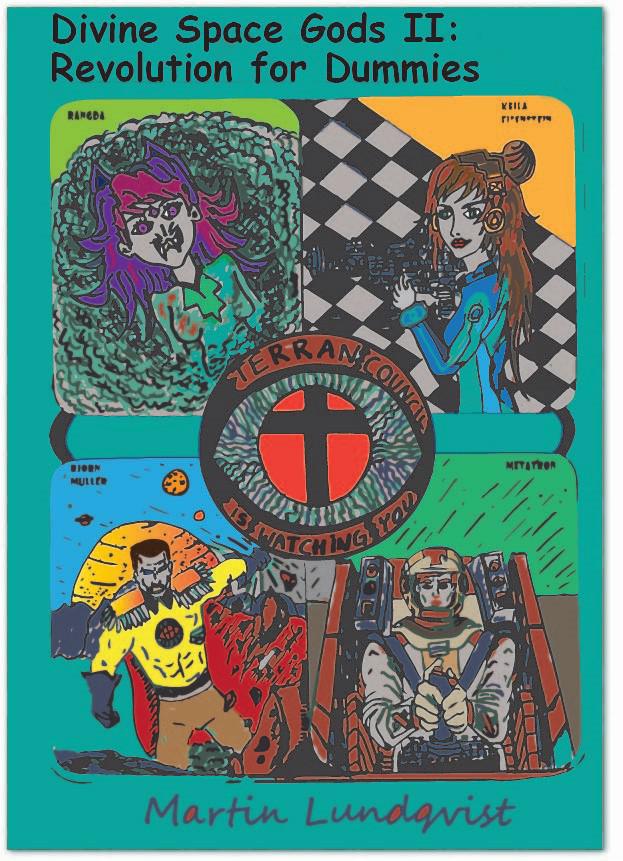 Keila is the perfect revolutionary:

She has something far more important: plot armour and the telepathic help of Rangda, the evil space demon!

It's the year 2872 and the young, beautiful, and utterly insane Keila Eisenstein is on the run from her long-time stalker, Rear Admiral Bjorn Muller. Escaping him for the umpteenth time, Keila crashes down on the asteroid colony Eden, most famous for the long running reality show "The Bronze Age Fools"

Convinced that Eden is her destiny, Keila kills "The Bronze Age Fools" unwitting main star Abraham Goldstein, which forces the show to cancel. Keila then fakes her own death by deleting her social media account and instructs her lover Metatron to release a press release blaming the cancellation of the show on Bjorn Muller.

Bjorn, who is convinced that Keila is dead, as he can't imaging her willingly deleting her SpaceBook account, goes back to Earth for a holiday.  The holiday is ruined as Bjorn is blamed for causing the cancellation of everyone's favourite show!

Being "dead", Keila builds up a revolutionary movement against the ruling Terran Council. Despite her lack of intelligence or common sense, her plot armour is leading her on the way, and with the help from the evil space demon Rangda, she is poised to free humanity from the oppression of the incompetent array of villains that make up the Terran Council.

But, is relying on an evil space demon to free humanity from a group of plutocratic oppressors really a good idea?


LATER THE SAME DAY Bjorn Muller had another one-man celebration in his private quarters. His latest celebration a couple of days earlier ended abruptly when Adal Schneider had told him that Keila managed to escape her spaceship in an escape pod and crashed on Eden just before her ship was destroyed. But this time her death was certain. Her Spacebook account was deactivated, and the error code that came up was “User has perished”. As Keila was a social media addict, this was conclusive evidence that she indeed was dead!

There was a knock on Bjorn’s door, and much to his disdain it was his right-hand man captain Adal Schneider and his chief scientist Markus Bauer. Bjorn instantly understood from the disapproving looks on their faces, that this was another instance of serious disgruntlement. Bjorn sighed and spoke:

-  What is it now my lovelies? I take it you haven’t confirmed the death of Keila for some reason, and you have come here to argue... Again!

-  Admiral Muller. We cannot confirm someone’s death based on them deactivating their social media account. We need hard evidence. You know, like a dead body.

-  And we need that body relatively intact so that I can examine whether it’s her real body or a dodgy non-functional clone.

-  Okay, gentlemen. I will see what I can do. Dismissed.

-  Why did you call him by the wrong title? He is Rear Admiral, not Admiral.
Adal:

-  Did you notice how smoothly that went? Always call Bjorn with a higher title than his real title if you are going to bother him. That will stroke his ego and make him more cooperative!