Dialogue Prompt : "We Are Not Alone In The Universe!" by Bryant Johnson

In a world where nothing is ever as it seems, three separate families are drawn to a great and terrifying truth. After winning the New Hampshire state lottery, Brent Brook 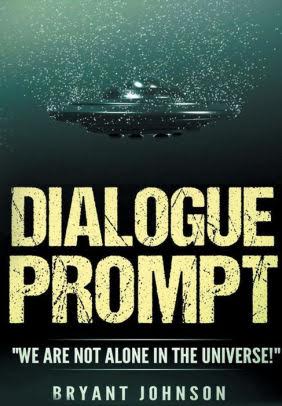 In a world where nothing is ever as it seems, three separate families are drawn to a great and terrifying truth. After winning the New Hampshire state lottery, Brent Brook treats himself to a new satellite dish and discovers a channel dedicated to the strange happenings. Hundreds of miles away in Virginia, reporter Marc Dazet stumbles upon the story of the most recent lottery winner and sets out to track down Mr. Brook as an interesting piece. Far away from the watchful eyes of the media, the Johnsons, a relatively normal military family, are called away to help serve their country at a far off military base. The orders? Unclear. However, their move has future implications that will change the course of history forever. In time, their lives and their families’ lives are thrown out of balance and the truth is revealed. One thing is for certain,
“WE ARE NOT ALONE IN THE UNIVERSE!”

It’s the autumn of the year 2017, in Hampton Roads, Virginia and Marc Dazet is a reporter working for the Virginia Pilot Newspaper based out of Norfolk, Virginia. Marc is 32 and has been married for three years to a woman named Sundara Dazet. Together they shared a beautiful daughter, Laura.

Marc had been working there as a reporter for seven years. He started off in circulation and worked his way to something he always wanted to do. Telling the truth about life in the community and abroad, has always been a goal of Marc’s. He read other newspapers from the other States to remain informed, like the New York Times and Chicago Tribune. Whatever paper had a newsworthy headline on the front page, Marc read. He had a peculiar routine practice on Thursdays to randomly choose a newspaper from an area.

On Thursday, Marc chose a newspaper of random choice to read their stories and watch the techniques of other reporters. Today, he chose a New Hampshire based paper called The Laconia Daily Sun. There is a room at the office in Norfolk, where the reporters can choose newspapers to read and see what the competition is doing and read newsworthy events from all over the States.

As Marc read the New Hampshire paper, the bold headline on the front page caught his eye:

THE POWERBALL LOTTERY FOR 429.6 MILLION