A book that leaves no stone unturned in verifying the historical facts of the Holocaust. 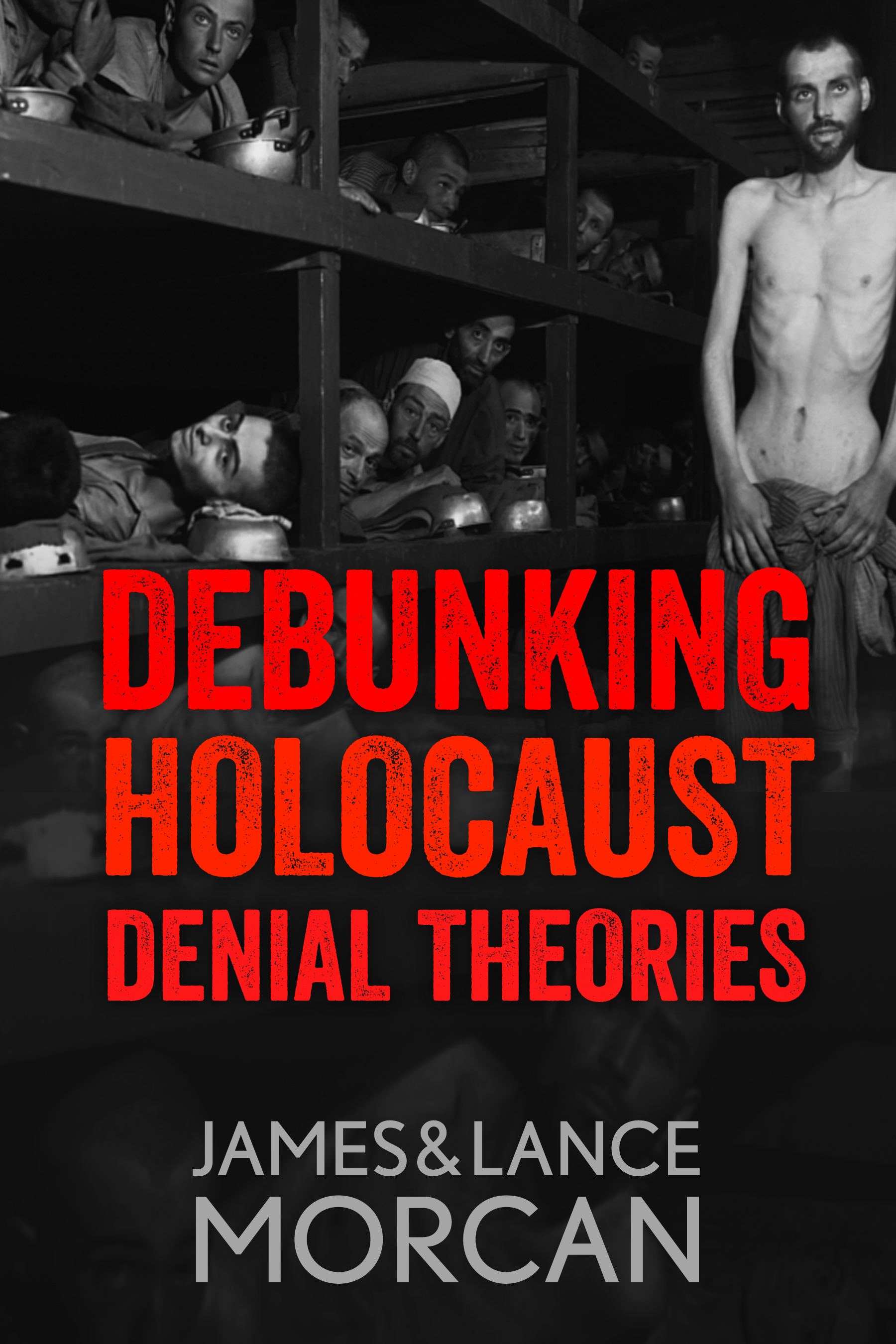 DEBUNKING HOLOCAUST DENIAL THEORIES, by James Morcan & Lance Morcan with a foreword by Holocaust survivor Hetty E. Verolme, aims to end the denial once and for all by tackling the bizarre phenomenon head-on.

Written in close consultation with Holocaust survivors and World War Two historians, no stone is left unturned in meticulously verifying the historical facts of the genocide. The Morcans present a wide array of sources including Nazi documentation, eyewitness accounts, scientific reports and shocking photographic evidence to shut down the debate deniers wish to create.

One by one, the various arguments Holocaust deniers use to try to discredit wartime records are carefully scrutinized and then systematically disproven. Theories debunked include: the six million death toll figure being an exaggeration; gas chamber exterminations being fictitious; Adolf Hitler and the Third Reich being wrongly vilified; the analysis of Holocaust records being a taboo due to specific laws in Europe criminalizing deniers; “Evil Zionists” and Israel being so powerful that they can censor history.

The Holocaust is shown in this book’s pages to be one of the most well-documented and most historically and forensically-proven crimes of the 20th Century. In the process, many of the world’s most infamous deniers, including disgraced British historian David Irving and the former President of Iran Mahmoud Ahmadinejad, are revealed to be nothing but anti-Semites seeking to further denigrate, undermine and demoralize the world’s Jewish population.

In this enlightening read that covers more than two millennia of global history, anti-Semitism is shown not only to be the root cause of every form of Holocaust denial, but also the reason for the relentless persecution of the Jews since Biblical times. The authors quote verbatim the often sickening and always baseless comments of kings, emperors, politicians, popes, bishops and muftis about the Jews and why they chose to commit numerous genocides against them over the centuries. These historical quotes prove eerily similar to the vicious anti-Semitic statements made by Holocaust deniers of this era…

If you wish to learn more about WW2 and the Nazi extermination camps, if you are confused by all the convoluted conspiracy theories circulating on the Internet about the Holocaust, or if you are currently a denier yourself, then DEBUNKING HOLOCAUST DENIAL THEORIES is a must read.


This new release book is already attracting excellent reviews and is shaping to be a bestseller despite being targeted by Holocaust deniers.

High profile denier Carlo Mattogno, author of numerous books championing Holocaust denialism, went so far as to publish a book debunking the Morcans’ book and featuring an identical cover image to their book.

For reasons known only to itself, Amazon has chosen to display the paperback versions of the two competing books side by side, offering purchasers a package price and advising readers the books are “frequently bought together”. Such aggressive marketing has drawn the attention of Holocaust deniers to both books and to their conflicting themes, and has boosted sales and attracted media attention.

Despite the attention of the deniers, the Kindle ebook version of the Morcans' book currently has a review rating of 4.5 out of 5 stars on Amazon.

"This book is the result of prodigious research. (Authors) James and Lance Morcan consulted noted scholars of the Holocaust...I recommend their book to everyone who has an open mind and wishes to learn more about this important topic. -Peter Kubicek, Holocaust survivor

"(This book) is a systematic examination of the antisemitic phenomenon of denials that the Holocaust actually occurred." -Arthur D. Schwartz

"This is one of the best books about the horrific crimes of the Holocaust. A definite 'must read' for young/adult and adult readers of all genres." -Sheri A. Wilkinson

Global reaction to the Morcans' book has prompted them to adapt it for a television documentary series and put it into development with their production company Morcan Motion Pictures.


This book is the result of the disturbing trend within some sectors of society to deny, diminish or otherwise undermine the historicity of the Holocaust – that cataclysmic event that saw the extermination of some six million Jews (as in the ethno-religious group of people) by the Nazis before and during World War Two.

Besides the obvious groups like white supremacists, neo-Nazis and elements of Islamic and Christian fundamentalist communities, there is perhaps one group in the 21st Century more responsible for perpetuating the myth that the Holocaust never happened or has been vastly exaggerated: conspiracy theorists.

We can speak with some authority regarding this as, besides being filmmakers and novelists, we have written a series of controversial non-fiction books that have led to us being loosely labeled conspiracy theorists. This despite the fact that in these non-fiction titles we mainly focus on factual topics or what we term “underground knowledge” – events, strategies, campaigns, deals and programs that have been overlooked or underreported by mainstream media.

As WikiLeaks’ founder Julian Assange succinctly put it: “There are conspiracies everywhere. There are also crazed conspiracy theories. It’s important not to confuse these two.”

We generally research and write about topics supported by strong evidence substantiated in court cases, affidavits, declassified government files and the like rather than pure speculation. Important issues such as: banking fraud and high finance crimes, which decimate communities worldwide; media manipulation, which governments and corporations engage in shamelessly and which sometimes leads to unnecessary wars; medical corruption, Big Pharma, Third World poverty, the War on Drugs, the Military Industrial Complex…The list goes on.