Backstage Pass to the Flipside 3 by Richard Martini

Talking to the Afterlife with Jennifer Shaffer Book Three

More conversations with the flipside with a medium who works with law enforcement agencies nationwide on missing person cases. 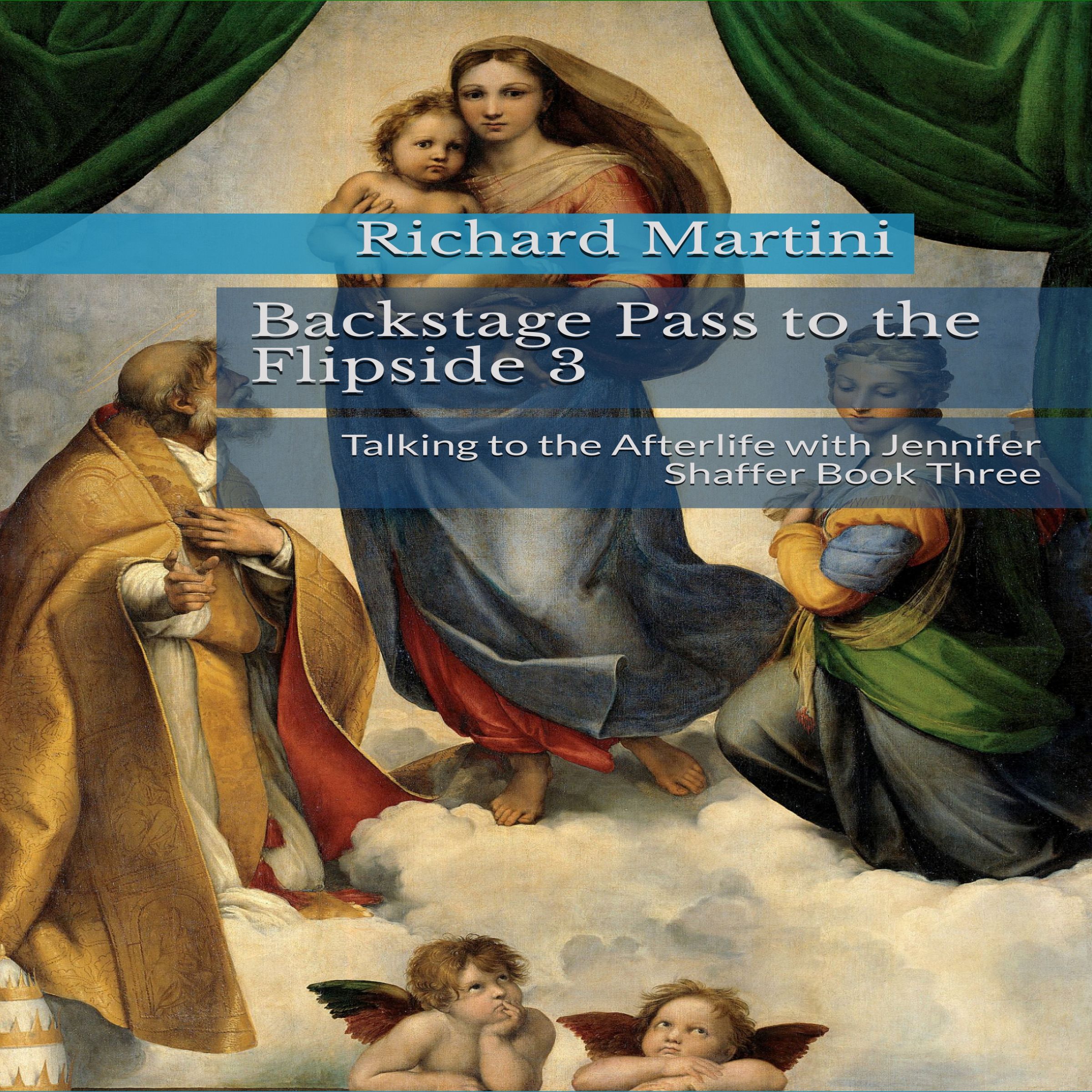 The third book in our ongoing discussions with people no longer on the planet. Books one and two include numerous interviews with friends, pals, friends of friends with the help of Luana Anders, actress and conduit for medium intuitive Jennifer Shaffer, who accesses information directly from the flipside as the author Richard Martini asks questions. In this book, there are wide ranging interviews with people considered "celebrities" people who were "scientists" in their lifetime, actors and friends the author knew in their lifetime (so he can verify the details of what they're saying) as well as icons and people that would appear to be impossible to speak with. Some interviews were engendered by the subjects themselves, with the idea of "passing along information to their loved ones." In some cases, the loved ones here said the "interviews" were amazingly accurate, others said that they didn't believe their relatives were reaching out to them. In all cases, the author tries to forensically verify whatever details possible. (Note: No one can claim to converse with the afterlife. However, when possible, the author uses second sources, or family members to verify the details.) The "conversations" are with everyone from Aretha Franklin, Prince, Robin Williams to scientists like Stephen Hawking, Carl Sagan, Nikola Tesla, Albert Einstein, interviews with friends like Bill Paxton, Howard Schultz, politicians like John McCain, Presidents Lincoln, Kennedy, Nixon - and avatars that appear to be accessible, as if they were outside of time. From Guru Rinpoche, to Buddha, Jesus to Krishna, to the 13th Dalai Lama - None of these interviews proves that life goes on - but when one compares the multiple interviews to other interviews where the same questions are asked, it does prove that there's a lot more than meets the eye when it comes to the nature of consciousness.


Often #1 in its genre at Amazon when I appear on Coast to Coast with George Noory of the televised program "Beyond Belief" on Gaia.  Along with the other books, these have consistently showed up in the top five every time I appear on the broadcast.  We currently have a podcast with over 10K views, a website with viewers and frequent questions on Quora.com


Here we are again. Welcome to the third book of interviews between myself, Jennifer Shaffer medium/intuitive, and Luana Anders actress/moderator and a cast of her friends on the flipside. Perhaps you’ve skipped the foreword, since it’s also in book one and two.  I include it for those who haven’t read books one or two. To bring you up to speed, Jennifer Shaffer and I have been utilizing the skills of my departed friend Luana Anders on the flipside to help facilitate conversations with loved ones no longer on the planet. I’ve filmed more than one medium asking the same questions to the same individual (Bill Paxton for example) and learned that in general folks on the flipside may tailor their responses specifically to the person asking the question.  So despite the fact that all three mediums said “the same things” in reply to my questions, someone else asking those same questions may get different answers, geared to them. For example, if I ask questions of my father who is no longer on the planet, he may tailor his replies to his insight into me, or his ability to access me.  I won’t pretend the process is science. I ask her leading questions because I can, because I already have proven beyond a shadow of doubt (to me anyway) that she is a cellphone to the flipside.  If the dear reader is looking for verification, go back to the beginning, with “Flipside” and march their way through to the last two “Backstage Pass” books. This is an ongoing series.

Collection/Series:
Backstage Pass to the Flipside: Talking to the Afterlife with Jennifer Shaffer