Amy and Argyle: There Are No Such Things As Dragons ~ Or Are There? by VJ Wells

What happens when a lonely little girl travels to Scotland for the summer and gets to spend time in a real castle with her Dad, Uncle Angus and her Auntie Morag? 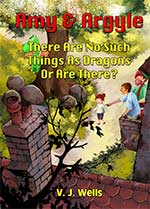 What happens when a lonely little girl travels to Scotland for the summer and gets to spend time in a real castle with her Dad, Uncle Angus and her Auntie Morag?
What secret does Uncle Angus have to tell her?
How does this secret help her to become fast friends with someone else who is lonely too?
And … who is Argyle?
Escape to Scotland with Amy and discover something amazing! Something so wonderful that Amy was absolutely certain couldn't possibly be true.


While they were having dinner, Uncle Angus explained about the castle – how old it was, how his ancestors had passed it down from generation to generation, how during uprisings the family had always fought valiantly to protect the castle.

Amy was fascinated and, with her head in her hands, listened intently to everything Uncle Angus said. Until he said, “And, of course, there’s the wee dragon in the dungeon, too.”

“Angus!” bellowed Aunt Morag, “There’ll be none of that! They’ve had a long journey, they’re tired and you’ll only frighten them. You’ll not expose this wee young lass to such a thing!”

But tired or not Amy simply could not let something like this pass.

“A dragon? There are no such things as dragons. They’re only in fairy tales,” Amy said with as much certainty as she could muster. Deep down she really wanted it to be true.

“Are they not, then?” replied Uncle Angus, smiling and Auntie Morag just sighed.