Explains the causes of decline of Pakistan Railways and suggests measures to revitalise it. 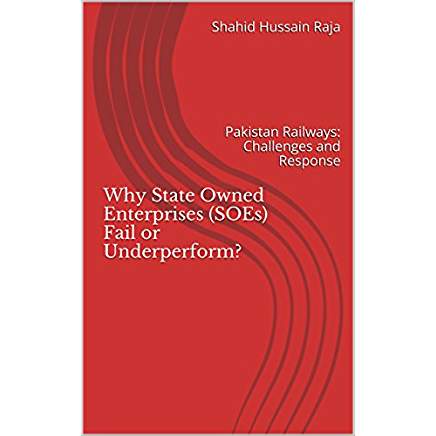 This short book is an expanded version of an article I wrote in LinkedIn about Pakistan Railways. Titled as Why State Owned Enterprises underperform? it explored the reasons for the failure of State Owned Enterprises with particular reference to the case of Pakistan Railways. After its publication, I have received a lot of comments about the lessons to be learnt from this case and how to restructure these state owned entities. This short book is in response to these comments.


State Owned Enterprises (SOEs) come with different names and sizes depending upon the country they are incorporated in or the purpose for which they have been established. Their names thus range from state-owned company/entity and state-owned enterprise (SOE) to Government/publicly-owned Corporation, and public sector undertaking, or para-statal. However whatever its name, a SOE is a legal entity that undertakes commercial activities on behalf of state.

Legal status of an SOE can vary from being a part of the government to being a corporate firm registered with the stock exchange. In this case, state holds majority or minority shares while its management may be with private sector professionals. Although they invariably also have public welfare as one of their main objectives, SOEs differ from other forms of government agencies or state entities which have been established to pursue purely non-financial objectives.

There are numerous complaints about these SOEs in almost every country with variation of severity of complaints from country to country and from entity to entity. These range from inefficient operational inefficiency, recurring huge losses, poor customer services, corruption and mismanagement. Unfortunately while condemning these state-owned and managed organisations for the above mentioned weaknesses, we normally do not have a clear perspective to judge whether these SOEs are profitable or not or why they suffer losses.