When Skies Have Fallen by Debbie McGowan

A love forbidden by both the armed forces and the law, a life together...can Art and Jim stand strong together, no matter how many skies have fallen? 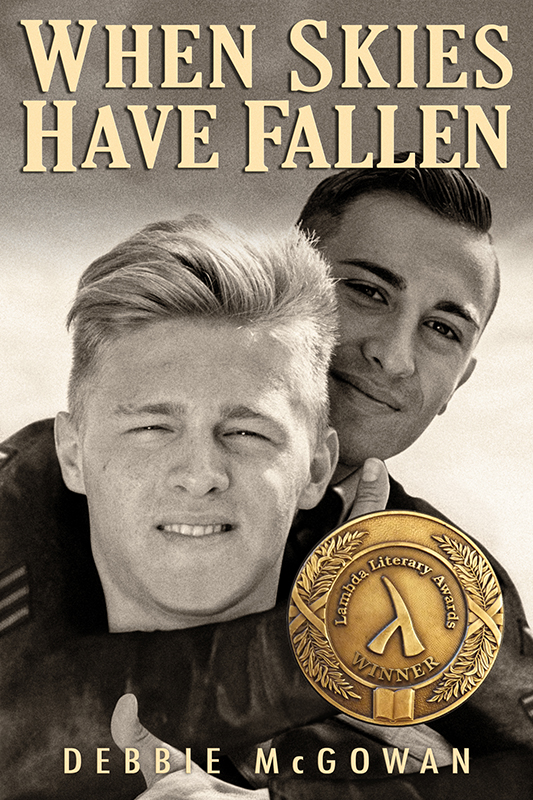 For many in war-torn 1944, love blossoms in the dance hall, and airman Arty Clarke is no exception. He’s a thinker and a dreamer; however, it’s not the beautiful, talented dancer in his arms—his best friend Jean—who inspires his dreams. For when his gaze meets that of Technical Sergeant Jim Johnson, Arty dares to imagine a different dance.

Their love is forbidden, by both the armed forces and the law, but with Jean’s cunning and support, Arty and Jim try to bridge the distance between them and find true love despite the danger and a life-threatening disaster that could destroy Arty’s dreams for good.

Can the pair stand strong together, no matter how many skies have fallen?

Winner of the 2015 Lambda Literary Award for Gay Romance.


When Skies Have Fallen won the 2015 Lambda Literary Award for Gay Romance.

The ebook (available for free) reached number one in the Amazon Gay Romance category and has remained in the top 500 since release in 2015. The paperback sells consistently each month, likewise for audiobook sales. None are stellar due to the minority market for this kind of novel (literary, LGBTQ, historical), but they are steady.


“Good evening to you, Corporal.”

His voice, a slow, deep rumble, startled Arty from his remembering. His breath caught in his throat as he fought to reply. “A good evening to you also, Sergeant…Johnson, isn’t it?”

“Sure is.” The man held out his hand for Arty to shake. “Technical Sergeant Jim Johnson, at your service.”

Arty reciprocated: “Corporal Robert Clarke.” The palm against his was big, rough and cool to the touch.

“None, actually. Arty is what they call me, on account of my initials. My middle name is Thomas.”

“Arty,” the American airman repeated with a wide smile displaying straight, white teeth that made Arty hide his own behind tight lips. “Great name, Arty. Has a good ring to it. They call me Jimmy, but I prefer Jim myself. You’ll be wooing us again this evening, I take it?”

“Wooing?” Arty’s vocabulary had abandoned him, along with his propensity to take in air.

“You and Sergeant McDowell.”

“Oh, yes. The waltz.” What an absolute fool he must seem.

“Looking forward to it,” Jim said. The smile remained in place, as did the firm yet gentle grip of his cool fingers on Arty’s own. “Well,” he drawled, bringing the other hand up to sandwich Arty’s, momentarily increasing the pressure and then releasing, “let’s talk later.” He looked Arty in the eye, capturing him with a piercing blue gaze.

Jim departed, and Arty quickly turned away, fearful that someone had seen their exchange. It was, to all purposes, an innocent introduction, but the look Jim had given him offered much more than words. Arty’s heart was thumping hard and he was panting like a dog on a hot day.