The Wrong Bettor by Richard Stooker

He plays a virtual reality game for the ultimate stakes -- his own life. 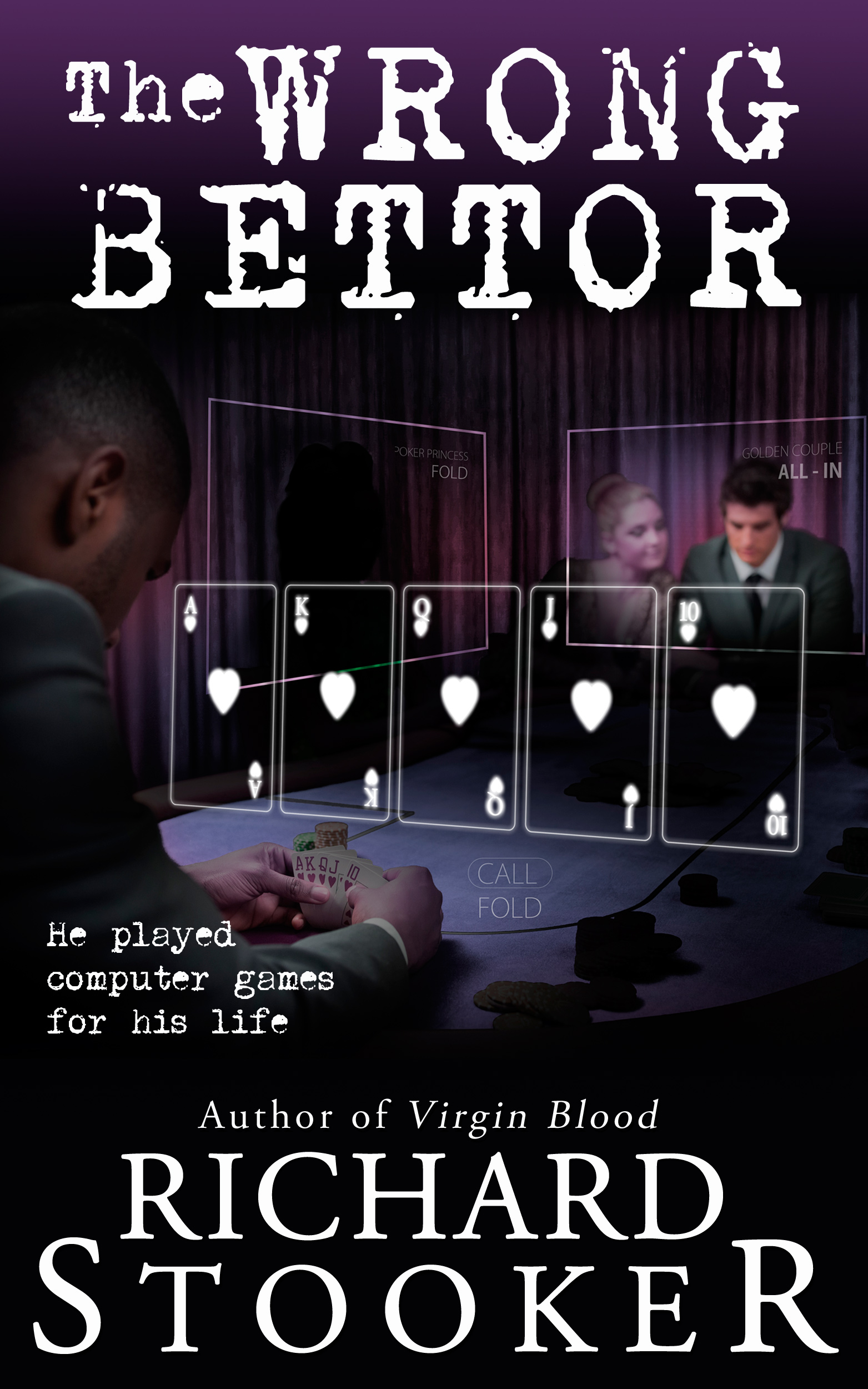 Dr. Pennell just wants his son back home. But Crain Dalton discovers the mob wants the boy to entertain the bigshots by playing a virtual reality game for the ultimate stakes -- his own life.

Even doctors with a trunk of hidden cash suffer when their teenage son hangs out at the local casino and takes a hooker for a girlfriend. A nice, suburban gal who will act out your most perverted fantasies.

Can Crain find Don Pennell in time to save him?

In craps, a wrong bettor puts their money down on Don't Pass and Don't Come. Most gamblers hate wrong bettors for bringing bad luck to the table, because wrong bettors win when everybody else loses.

In the near-future, computer games evolve to total virtual reality. Players experience an altered reality, and spectators can share the game with them.

Winner makes a boatload of cash.

While crime bosses, politicians, and the idle rich watch . . . and place their bets.

In The Wrong Bettor we see the future of the economic decay of the recession, combined with high tech advances -- not pretty.

Unavailable for over 30 years, until now, The Wrong Bettor originally appeared in the ARCHON 7 PROGRAM BOOK, July 1983.


This short story was originally published in the ARCHON convention book. It's the same main character as The Copper Quarter. An Audible version is in the works.


Central City shoppers could buy soup bones and strawberry astro-bread, play Total-Environment video games or swing to insipid torture-rock. They could also buy anything on the black market from a sack of wheat berries to a banned book, meet a pusher of illegal drugs, rent a hooker, drink after hours and place any kind of a bet. They could put money on the horses, pro sports, the numbers, or at the roulette and craps tables in Jake's.

Men and women with flat eyes and pasty, corpse-like complexions stood in clumps around the tables. In tattered books and tennis shoes stuffed with newspapers, they stepped lifelessly on the threadbare rugs scattered over the concrete floor, shuffling and pushing against each other as they put their chips down. Cigarette smoke hung thick in the air. Unshaded lightbulbs over each table glared through the haze.

A loanshark sat at the desk beside the cashier. If anyone runs out of money but wants to keep playing, he bankrolls them. They can take as much as they like. There is no hurry about repaying the capital, but they better not get overdue on the weekly vigorish. He is a businessman, not a charity. He must charge vig for the use of his money. If someone is able to pay it but unwilling, several muscle boys will put them in the hospital. If they are willing but unable, they may find themselves driving for a heist, fingering their employer for a shakedown, giving a piece of their business to an off-the-record partner or letting strangers into their wife or daughter's bedroom.

The broadshouldered pit boss wore a ratty brown knit hat on his head and a slouched, hung-down look on his face. I asked him, "Anybody here name of Darryl Flanigan?"