The With Werewolves Trilogy: 3 Book Box Set by K. Matthew 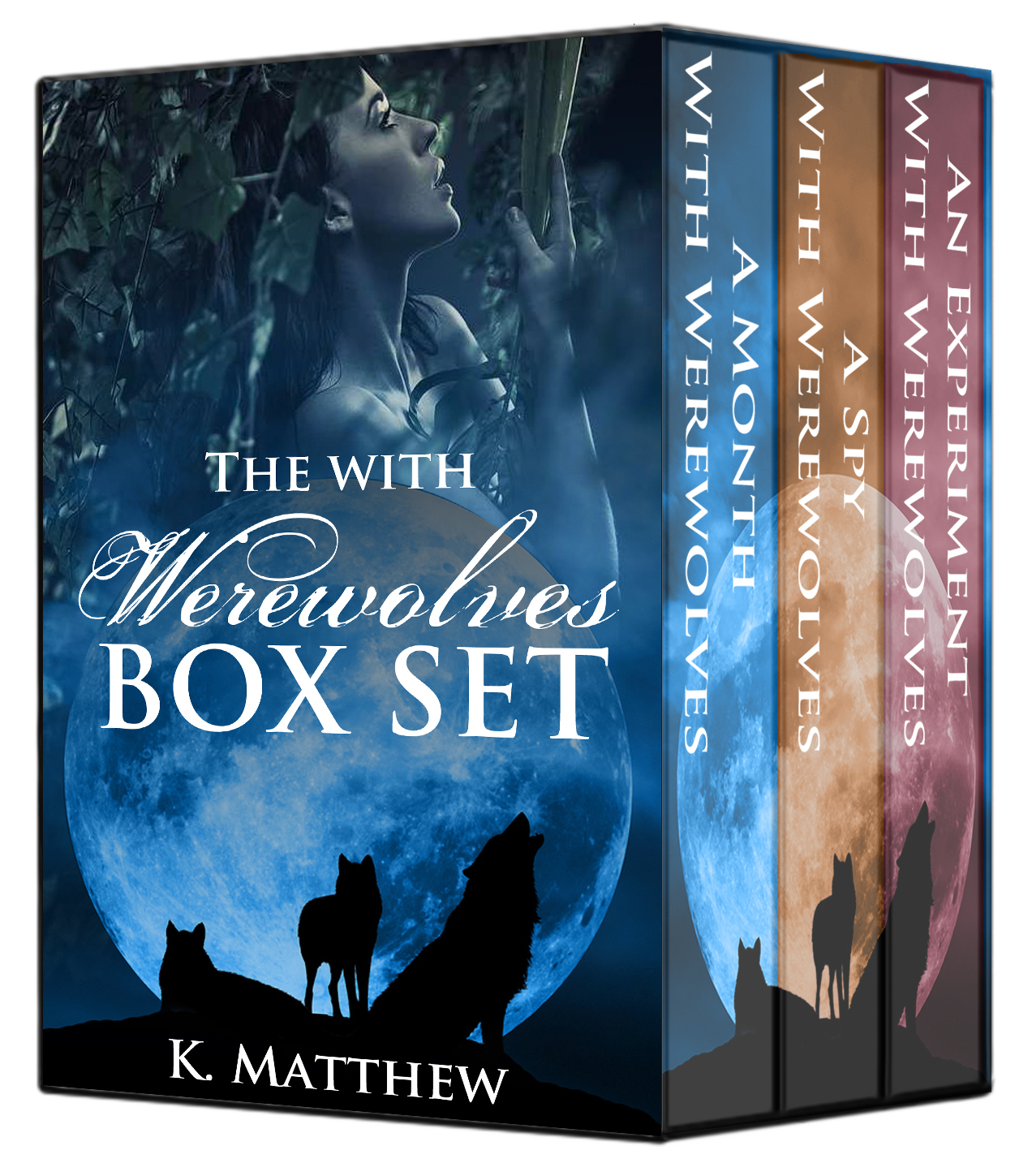 This is the entire With Werewolves Trilogy. Enjoy three unique werewolf novels that can be read as stand alones or as a set.

A MONTH WITH WEREWOLVES

A budding journalist trying to advance her career. A secluded werewolf reservation shrouded in mystery. A secret culture unexplored.

Taya Raveen has been assigned a journalism project that's guaranteed to sky-rocket her career, a chance to see inside the infamous Blackfoot Werewolf Reservation. More a prison than a sanctuary, the reservation spans one thousand acres and is home to over fifty captive werewolves. No civilian has ever been allowed inside of the reservation, but Taya will get to glimpse it from an outsider's perspective, reporting her findings to the entire world.

With little funding, the werewolves have been all but forgotten by the outside world, living in a secret society inside of the reservation. Taya's main objective is to ensure the general public that the werewolves are being treated humanely and bring to light the need for a cure for the lycanthropy disease.

All seems good and well at first, but the longer Taya stays inside of the reservation, the more she begins to see the dark side of werewolf society. Not to mention that her arrival spawns dangerous plans for the werewolves to take finding the cure into their own hands.

A SPY WITH WEREWOLVES

A new heroine. A secret operation. An experience that will forever change the Blackfoot Werewolf Reservation.

Taya Raveen has failed. Infected with the lycanthropy disease and trapped inside of the Blackfoot Werewolf Reservation, her report on the reservation has been filed away never to be seen again. But someone did read it. Someone has been watching from the outside.

The sacrifice of a lifetime leads Cassandra Frost to the gates of the Blackfoot Werewolf Reservation where she's welcomed with open arms. Little does the compound staff and other werewolves know that she's there with a purpose. Everything that Cassandra does is being documented in an attempt to bring the reservation down from the inside out.

She enters the reservation with a plan, but things quickly turn upside down when she discovers the corruption of power from within the pack hierarchy. Will she be able to accomplish what Taya didn't, or will she end up stuck in the reservation, a prisoner like the rest?

AN EXPERIMENT WITH WEREWOLVES

A chance for a better life. A new adventure. A place that's not what it seems.

A revolution has begun. All over the United States, werewolves are being sent to rehabilitation facilities to begin a socialization program before they're released back into society as free men and women. It seems like the light at the end of the tunnel of captivity.

But not everything is how it appears to be. While other werewolves are sent to true rehabilitation facilities to appease the media, Taya is sent to one with a much darker purpose. Separated from her lover and friends, she's forced to find out the truth.

Experimentation begins before the werewolves even realize what's happening to them. As they're split up and segregated, Taya begins to understand the real purpose of the facility. Will she be able to escape, or will she die at the facility, like so many before her?


No civilian had ever been inside the Blackfoot Werewolf Reservation before. They called it a reservation, but it was more like a relaxed concentration camp where werewolves were separated from the rest of society to live out their lives peacefully until a cure was found for their condition.

I had little interest in the subject until I was offered a chance to investigate the reservation for a journalism piece. Since no civilian had ever been allowed inside of the reservation, my report would gain worldwide recognition. It would be my big break, skyrocketing a career that I had been working hard at for the past five years.

As I pulled up to the reservation, I took a deep breath. The outside of it looked like a prison, with a thirteen foot high parameter fence surrounding the one thousand acres of land. There was a small compound that I had to go through before I could get to the reservation itself. I would stay there for my first night, learning how the place was run before they took me inside to live out the rest of the month with the werewolves.