The White Flamingo by James A. Newman

FUN CITY is run by corrupt officials and respectable gangsters wallowing in luxury mansions in the hills high above the harbour, the beach, and the neon jungle. So just a normal day when vice worker and good -time-girl TAMMY is found mutilated on top of a 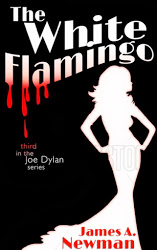 FUN CITY is run by corrupt officials and respectable gangsters wallowing in luxury mansions in the hills high above the harbour, the beach, and the neon jungle. So just a normal day when vice worker and good -time-girl TAMMY is found mutilated on top of a pool table with all the hall-marks of a Jack the Ripper copycat killer.

THE local criminal orginzation known as the POLICE lock up effete pervert SEB BELL who is son to the 1970's pin-up beauty queen once known as THE WHITE FLAMINGO.

THE FLAMINGO hires detective JOE DYLAN to find THE KILLER before he becomes one of the hunted and the body-count mounts up.

THE WHITE FLAMINGO is a break-neck neo-noir crime thriller from beak to tail feather peaking at number one in the crime noir charts.


The White Flamingo has sold briskly in little over a year and has been optioned for adaptation into a motion picture by Earthlight Productions. It has reached the number one position in the Amazon crime noir charts and has enjoyed a good critical response from peers in the genre such as Edgar and Shamus nominee Timothy Hallinan who writes that "Newman writes with a flamethrower. He is terrifically gifted"
Much of Newman's audience are European, Asian and Russian.

TAMMY WAS sliced open and mutilated in Fun City, her body spread on Slim Jim’s moth-bitten pool table like a piece of raw meat on a roadside stall. The attack had taken place early that Thursday morning between closing at 2am and opening at 11am.

She once had the face of a puzzled fox. She had once liked mobile telephones with poppy ringtones and Japanese food. Walks along the seafront and slapstick television shows. At first glance there was nothing unusual about Tammy except for the way she had been mutilated. The Detective guessed her mind had danced to the tune of money just before the killer’s blade did the talking.

She was cut open. Raw like sashimi. It was quite a picture. Her heart was stuffed down the top right pocket, the left ventricle slipping through the netting like a live catch. Her bloated liver was carefully placed in and perfectly fitted the D. Both ovaries were shoved down the bottom pockets. The two middle pockets housed a severed breast each. Her face tilted backwards staring at the table light in that sudden snarl of surprised mortality. The killer had slashed at every contour of Tammy’s body, except the face.

He had left the face.

The smell was similar to that of a tropical open meat market, a dark gritty stench that filled the lungs and gagged the throat. A stench that battled victoriously over the smell of cigarette smoke, and second-hand beer and whiskey. The two men looked at corpse.

It was a real messy spread.

The flies buzzed around the open wounds. The hum of a ceiling fan overhead. On her left thigh was a crude engraving of a symbol that looked to the detective like a child’s drawing of a wading bird; a stork, or a heron.

Another one on the abdomen.

Sick in the head.

Whoever had done it.

The bastard was sick in the head.