What Would You Do If Your Son Was Lost In time? 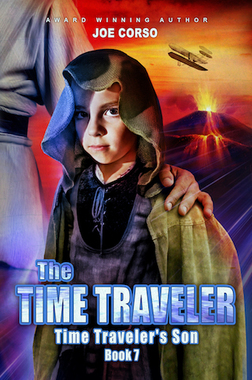 When king Robert of England falls deathly ill, it's up to Lucky Campo to step in and save the day, for all times sake. The problem is, the 12th century isn't known for its cutting edge medicne so Lucky is faced with the realization that he has no other option but to take Robert back to the 21st century, hoping and praying that the doctors at the COMPOUND can save the ailing monarch.
Meanwhile the other robert, Lucky's son, has inherited his fathers ability and can see the shimmering gateways that crisscross the time stream allowing him to travel through various points in time and space. When his son't inherent abilities become known to him, Lucky fears that Robert in his youthful ignorance may not fully understand the danges he faces when entering a portal. Thus out of neessity a partnership is formed between father and son, one teaching, the other learning
​But when Robert and Mickey are kidnapped, the young boy is forced to put everything his father taught him to the test without adult supervision. He and Mickey escape through a gateway, which plunges them into places no six-year old boy should everh have to go. Lucky desperately searches the time stream for his son and best friend. Will he find them in time? Or is timesimply not on his side? Find out in this thrilling new roller coaster time travel adventure

After a cold snowy winter spring arrive and the king’s gardens were in full bloom. Little Robert was now a very active six year old and he loved the attention his father doted on him. His father strolled along the winding path surrounded by lush green foliage seeking a bench in a quiet well hidden remote section of the garden. He came to this spot every day to read a book in quiet solitude. Young Robert who loved to accompany his father would inevitably find him. And when he did he would sit beside him and snuggle close to him. He’d be quiet for a while but then the barrage of questions would begin.

“What are you reading father?”

Lucky would show him the book and tell him about the story.

“Why are you reading that story father? And why do you read books father?”

With patience Lucky always answered his son’s questions. Lucky smiled and tussled his sons hair. “I read books to learn about things son.”

“What sort of things father?”

“When I don’t understand something I’ll read a book on that subject so I can find the answers I seek. This way I can learn more about it.”

Robert nodded his head as if he understood. “I think I understand father.”

Lucky hid a smile and looked at his young son thinking of how intelligent his little boy was. “Tell me Robert, how do you understand what I mean, when I told you that I read  books so I can learn about things?”

Little Robert looked up at his father, his intelligent eyes wide with understanding. “When I’m old enough to read books,