The Road Goes Ever On by A. K. Frailey

A Christina Journey Through The Lord of the Rings 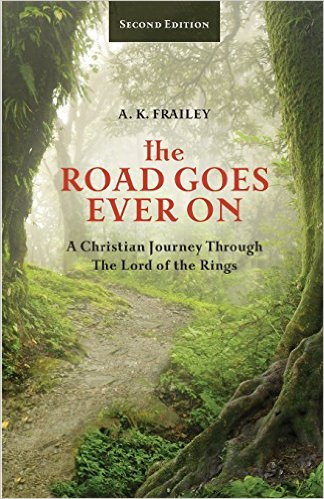 Tolkien's story, The Lord of the Rings, touches the soul in a profound way. Why is that? What makes the heroes so attractive? Can we ever become like them? The power to be strong and valiant is not limited to Middle-earth. We have been given the same tools and gifts that they are offered if we but recognize them. The rings of power in our society tempt us and our children as well. We would be wise if we awakened to that which tries our souls. Take a look at this classic from a Christian perspective, and you might bring Middle-earth a little bit closer to home.

“But in the wearing of the swift years of Middle-Earth the line of Meneldil son of Anarion failed, and the tree withered, and the blood of the Numenoreans became mingled with that of lesser men.  Then the watch upon the walls of Mordor slept, and dark things crept back to Gorgoroth. And on a time evil things came forth, and they took Minas Ithil and abode in it, and they made it into a place of dread;…..” (The Fellowship of the Ring p321)

The first time I read of Hobbits and their adventures I was eleven years old and I was borrowing The Hobbit from a friend.  When it came to the dark mines of the goblins I was unnerved and I could not finish the story.  I felt as if I had missed something of importance but what it was I could not at that time discern.

When I was much older, carrying my second child, and enduring the torments of severe morning sickness my husband suggested I read The Lord of the Rings to get my mind off my suffering.  It was a strange suggestion as I think of it now but it turned out to be a wonderful act of benevolent insight if ever there was one.  I began The Hobbit again, to get the background, and I felt myself drawn into a world that spoke volumes to a heart that was expanding as it never had before.

In that reading, and in subsequent readings, I glimpsed the mind of a soul that saw meaning in the lives of the most varied characters which reflect the real world people in our own lives.  Even more surprisingly there are reflections of the various aspects of each of our own personalities.