The Lead Cloak by Erik Hanberg

Set in 2081, the world has no more privacy, and those whose lives have been shattered want to destroy the technology responsible. 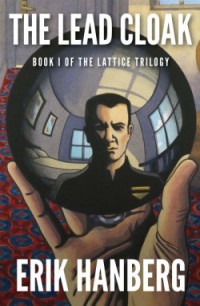 Byron Shaw can track and find anyone on Earth. Except the people who tried to kill him.

By 2081, privacy no longer exists. The Lattice enables anyone to re-live any moment of your life. People can experience past and present events--or see into the mind of anyone, living or dead.

Most people love it. Some want to destroy it.

Colonel Byron Shaw has just saved the Lattice from the most dangerous attack in its history. Now he must find those responsible. But there's a question nobody's asking: does the Lattice deserve to be saved?

The answer may cost him his life.


Still very new and only out a couple weeks, but the reviews and word of mouth have been excellent.


Byron Shaw was in a jump. For ten glorious minutes, the men’s room was transformed into a small forested hill at the edge of some Pennsylvania farmland.

The body of Colonel Byron Shaw was in a bathroom stall, but his mind was two centuries in the past, visiting another Colonel—Joshua Chamberlain—who was protecting Little Round Top from the Confederate army that was attempting to flank his position.

“We’ve only got enough ammunition for a single volley,” Shaw/Chamberlain said to his closest troops. “We’ll use bayonets and attack down the hill, the left flank starting their charge first and the rest following, like … like a swinging door. Pass the word down the line and tell them to wait for my order.”

Chamberlain waited for the order to reach the men under his command, his face projecting calm.

Despite the years between them, Shaw could feel how intentional the expression was, how much Chamberlain was masking his fear. He felt the doubting questions begin to bubble up in Chamberlain’s mind. Was this lunacy? How would his family and friends back in Maine remember him if this failed? Was this the last desperate act of a desperate man?

There was no time for such thoughts, though, and Chamberlain pushed his doubts aside. He couldn’t count on any more time from the rebels at the bottom of the hill.

As the Union line began mounting their bayonets on their rifles, Shaw felt a pinch in his right ring finger. In fact, the small metal ring had gone quite cold, causing the metal to constrict and squeeze against his skin. It would squeeze more tightly if he didn’t jump back from Gettysburg within the next five seconds.