The Kammersee Affair by John Holt 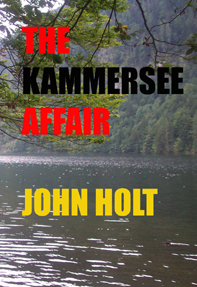 The lake was flat and calm, with barely a ripple, its dark waters glistening, reflecting the moonlight as though it were a mirror.
Fritz Marschall knew that neither he, nor his friend, should really have been there. They, like many others before them, had been attracted to the lake by the many rumors that had been circulating.
He thought of the endless stories there had been, of treasures sunken in, or buried around the lake. He recalled the stories of the lake being used to develop torpedoes and rockets during the war. Looking out across the dark water, he wondered what secrets were hidden beneath the surface.
A story of the search for hidden Nazi Gold, a story of murder, blackmail and revenge. The story of two men - an american GI and an SS Major


A young man sat by the water’s edge. He was in his middle twenties, tall, and slim, with light brown hair. Lying next to him was a discarded oxygen tank, and a diving mask. He sat contemplating the stillness of the lake. A stillness that was momentarily disturbed by a fish as it rose to the surface for air, or to catch an insect. There was no sound, other than the gentle rustle of the trees, and crickets chirping. Or perhaps the gentle lapping of the water as it met the shore. Nearby, a frog croaked, and splashed into the lake. Overhead an owl hooted and then settled down for the night.

The young man stared at the water, and thought of the series of dives that he and his friend had made that day. Over the past few days they had gradually worked their way across a section on the northern shore. Today they had been concentrating on a section to the northeast. The area consisted of a large clearing which gently sloped down to the edge of the water. It was reasonably accessible, and looked promising, and they had just started to investigate the area that day. They had achieved a depth of twenty metres, down to one of the shallower shelves that lined the perimeter of the lake. Even at that depth it was still quite dark. Visibility was made even more difficult by the swirling undercurrents stirring the sediment in the lake.

Fritz Marschall knew that neither he, nor his friend, should really have been there. They, like many others before them, had been attracted to the lake by the many rumours that had been circulating. They had been drawn to the area by tales of hidden treasure, and buried gold. They were only rumours, and there wasn’t an ounce of proof, or a shred of evidence to back it up. But still the rumours persisted, and the attraction was still irresistible.