The Interstellar Age: The Complete Trilogy by Valmore Daniels

The secret to faster-than-light speed is up for grabs, and the race for interstellar space begins! 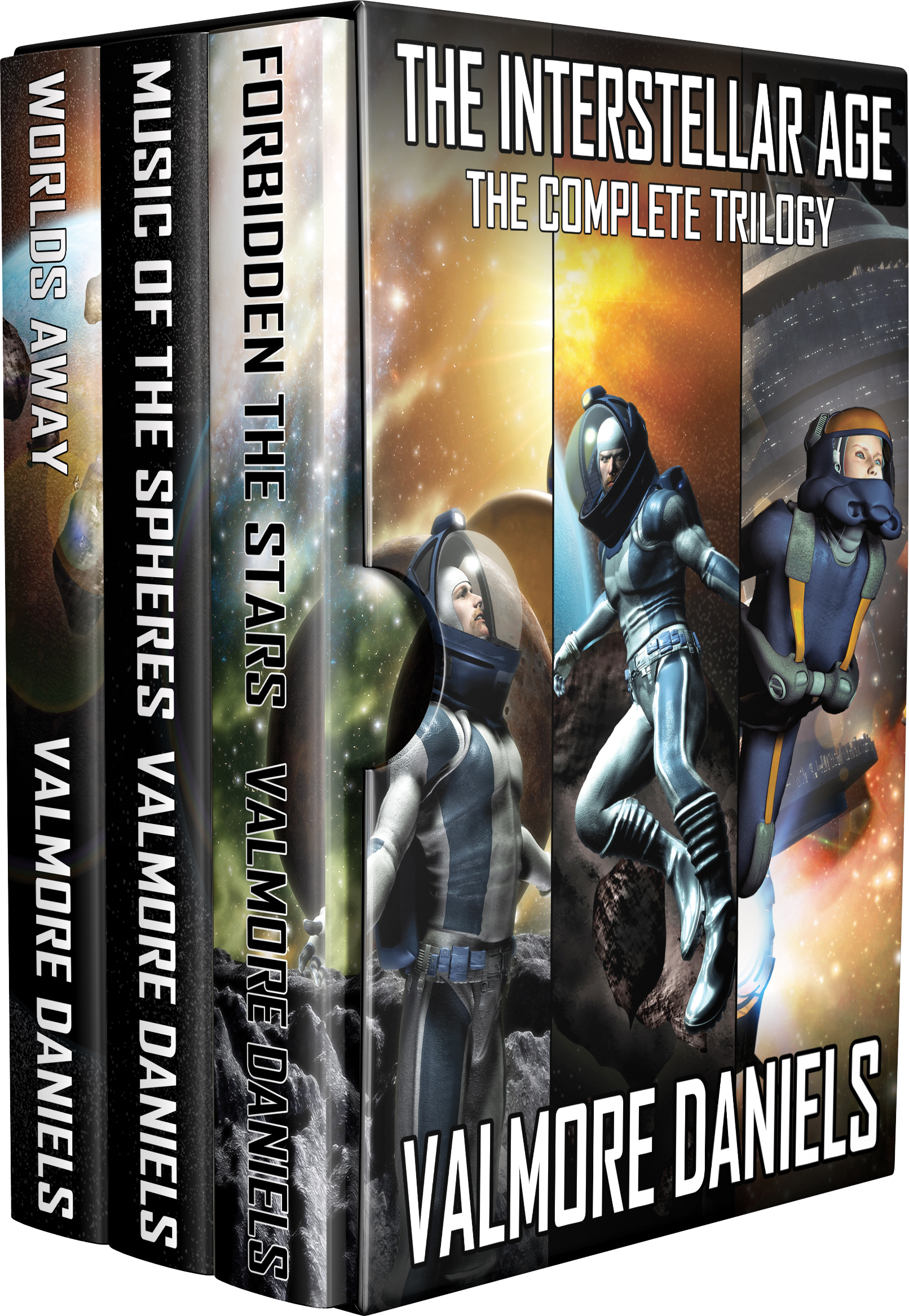 At the end of the 21st century, a catastrophic accident in the asteroid belt has left two surveyors dead. There is no trace of their young son, Alex Manez, or of the asteroid itself.

On the outer edge of the solar system, the first manned mission to Pluto, led by the youngest female astronaut in NASA history, has led to an historic discovery: there is a marker left there by an alien race for humankind to find. We are not alone!

While studying the alien marker, it begins to react. Four hours later, the missing asteroid appears in a Plutonian orbit, along with young Alex Manez, who has developed some alarming side-effects from his exposure to the kinetic element they call Kinemet.

From the depths of a criminal empire based on Luna, an expatriate seizes the opportunity to wrest control of outer space, and takes swift action.

The secret to faster-than-light speed is up for grabs, and the race for interstellar space begins!

Music of the Spheres

The technology for interstellar flight exists through the power of Kinemet,
but the key to unlocking its code lies in a thousand-year-old scroll left on Earth by an alien species.

When the ancient manual is stolen before a full translation is completed, Alex, Michael and Justine scramble to recover it.

Along the way, they stumble on an interplanetary conspiracy and uncover a secret that shatters their view of life and shakes the very foundations of our existence.

For a thousand years the Kulsat Armada has ravaged the galaxy searching for the lost legacy
of an extinct race of technologically advanced beings. They destroy anyone who gets in their way.

Now they have turned their attention to Earth and are gathering their forces for an invasion.

Justine, Michael and Alex each hold a key to stopping the enemy, but they are worlds away from each other, and they are running out of time...


With over 40,000 copies sold to date, and an average 4.4 out 5 rating on Amazon.com, The Interstellar Age comprises three novels in the series: "Forbidden The Stars", "Music Of The Spheres", and "Worlds Away".

To prospective translators: Although it is an immense task, you must be willing to commit to translating the entire box set rather than the individual titles. It's extremely important to maintain the same "voice" throughout the series. Once translation is completed, the individual books will be released as well as the box set with the same translator and the same contract under Babelcube's terms and conditions. Releasing the books in this manner provides mulitiple marketing opportunities, such as offering the first volume as a "free sampler" - a technique that has proven effective in the English versions. If you have questions about this process, please don't hesitate to message me. I'm looking forward to working with you.


My ancestors tell us that on a calm, still night, if we listen hard enough, we can hear the planets move. They call it the Music of the Spheres, and its song is a tale of the return of the gods. I have heard this song.

But I am just an old man. What do I know?

My grandson comes up to me to ask permission to play with his friends. I ask him, “Do you want me to tell you the story of the end of the world?”

I know he has already heard me tell this tale, and he does not believe. He would rather play with his friends.

Maybe if I tell him a few more times, he will come to believe.

I can only hope; but what do I know?

I tell him of Hunab Ku, the god of gods, the creator of the Maya. I tell him that Hunab Ku rebuilt the world three times after three deluges, which poured from the mouth of a sky serpent—some say from the mouth of Kukulkan, god of the sun, the oceans, the earth, and the sky.

I tell my young grandson, who grows bored at my tales, that Kukulkan built the first world and the second world. He did this so that the third world would be ready for the People of the Earth, the Maya.

My grandson smiles. He believes I am just a lonely old man who tells grand tales.

The ancient gods decreed this.

The fourth world must suffer under a deluge to make way for the New World. If the white men do not accept the changes, Kukulkan will destroy them.

Above all things, the gods will build the New World.